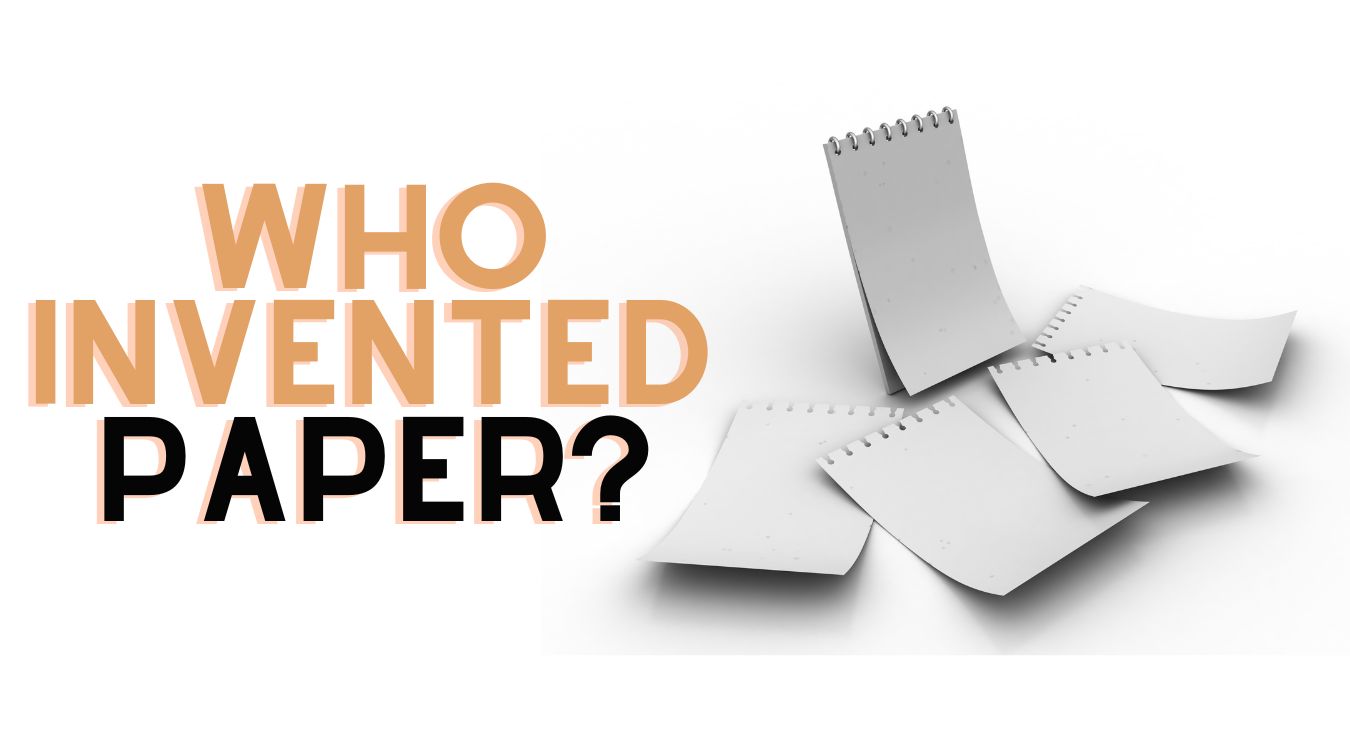 Who invented paper? Throughout history, people have written long before paper was invented. Paper was made from a variety of materials, including bark, silk, wood, and leather. These materials were mostly either heavier or more expensive than paper. Bamboo strips were often used to write early works in China, then bound into book form with leather straps or string.

In addition to carvings into stone or bone, people around the world also pressed stamps into wet clay to preserve their words, or pressed letters into clay to create tablets and then dried or fired them.

Various primitive paper types have been found in China dating from the 2nd century BC, mostly made from hemp. According to legend, this early form of paper was accidentally invented by washing clothes too long, thereby leaving a residue in the water that could be compressed into a useful material. Traditionally, more refined paper dates back to 105 CE.

Using soaked and pressed plant fibers, Cai Lun, a Chinese court official, created paper using fixed sheets of wood or screens that were then dried. For centuries, bamboo strips and silk were used as a writing surface, but finally, paper scrolls came up with a lighter and cheaper option.

By the end of the Han period (206-220 CE), the Chinese were using different fibers for making paper. Various plant-based fibers, such as grasses, plants, hemp, tree bark, and even rags were blended to find the cheapest mix of materials that would produce the best paper. In the 8th century CE, Rattan replaced hemp paper as the most prevalent raw material and remained popular until bamboo fibers replaced it. Writing paper was even used as toilet paper during this time!

There was such a large demand in certain areas of China for a paper that rattan was almost wiped out. Since bamboo grew more quickly, it became a cheaper option. During the Song Dynasty (960-1279 CE), paper-making techniques improved even further, with boiled bark from mulberry trees now being the main raw material. The Silk Road was a trade route along which Chinese paper was traded with foreign states. This was also when the Chinese government began using paper money.

Paper sheets were available in a wide range of sizes and colors. In terms of materials, techniques, and preferences, variations existed between regions, however, the earliest treatise on the topic was written by Su I-chien (957-995 CE). Calligraphy and art were traditionally conducted on special paper featuring an appealing texture, design, or coloring.

Introducing Papermaking Techniques to the World

Initially, the Chinese kept their paper-making techniques a secret from the world. However, when some papermakers were held captive by Arab, the process was introduced to the rest of the world. This happened in the 8th century CE. Need of the hour, shall we say?

Paper was a valuable tool in the 8th Century for Arabs, but their writing surface of the paper document were inconsistent.

When the Arabs decided to make a better paper, they added “sizing.” This combination of starch and other additives enabled ink to sit on top of paper fibers instead of penetrating them. The material was also made stronger and brighter. This led to a far easier time writing on it as well as a far more durable product.

The Arab world is also credited with setting up the first industrial paper mill. Sheets produced by this facility were consistently thicker compared to those previously produced. It is believed that this marks the beginning of the industrialization of papermaking.

Europeans had become familiar with paper and used it by the end of the 13th century. Paper mills powered by water aided its production, which significantly reduced its production cost. European papermaking spread to America in 1575.

The paper industry got its first major upgrade in 1680. Bamboo was once used to make paper by the Chinese, but there was never a reliable, mechanized method of obtaining the fibers. Dutch engineers solved this quandary with the Hollander Beater. Using this machine, plant-based fibers could be extracted efficiently. In this way, new virgin fibers could be included in the papermaking process. This method did not replace “rag paper,” but it helped enhance fiber sources.

As early as 1800, paper makers discovered that agricultural products could be used in papermaking. Flax was grown in some cases to supply the first reliable raw material to paper mills, such as flax. However, it was quite costly.

The papermaking process has evolved incrementally since 1850. These days, most papers are manufactured by chemical processes, with many additives being developed to make the paper brighter and smoother. Manufacturers also use recycled paper to make newspapers, wrapping paper, and grocery bags.

We cannot imagine life without paper but what is the environmental impact of paper production? Read below to know.

Approximately 71.6 million tons of waste is generated by the paper manufacturing industry in the U.S. each year.  The environmental impact and energy consumption of producing, transporting, and burying reprocessed paper are mitigated through the recycling of paper, but not their environmental impact.

In general, paper and paperboard comprise about 26 percent of solid wastes dumped in dumping sites. Moreover, pulp and paper mills contribute to a variety of environmental problems, including water, air, and land pollution.

You would be surprised to find out that the paper industry also uses more water to produce products compared to other industries.

Massive tracts of virgin forest throughout the world are being harvested for paper pulp production, contributing to the history of deforestation. It’s true that trees are renewable, but the ancient plant and animal communities found in ancient forests are often not, as their complex ecological balance has developed over thousands or millions of years.

Now you know who invented paper!

We hope that the guide proved to be informative for you. If you have more relevant information that you think can benefit our readers, feel free to share it in the comment section below!

Who Invented The Toilet?