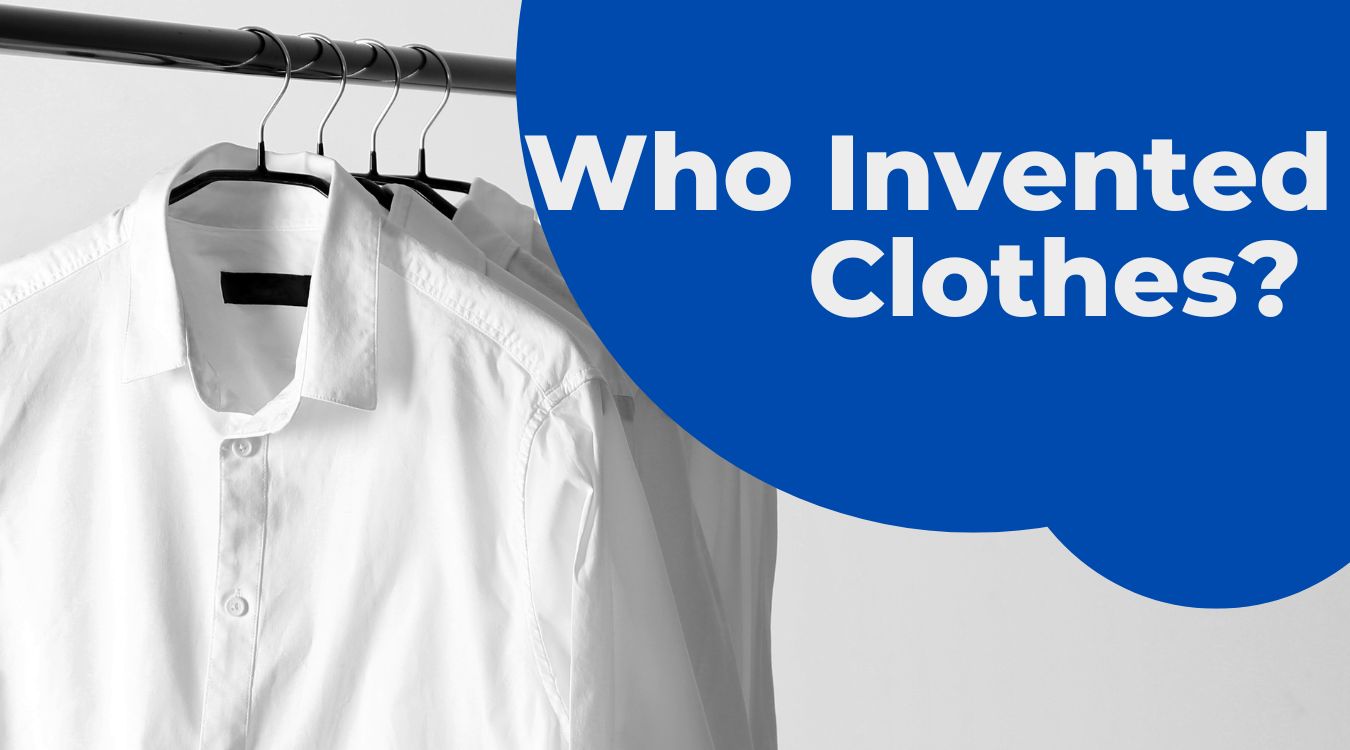 Clothing protects from environmental hazards and even allows you to express your personal styles, but it wasn’t always like this. Who invented clothes and when did humans start wearing clothes? Let’s find out!

Our cousins, the Neanderthals are known to be the first people to make and wear clothing. They survived from about 200,000 B.C.E. to about 30,000 B.C.E, and the weather of our planet around this time kept fluctuating dramatically. There was a series of ice ages the early men had to go through.

They thrived in the cold climate of their day thanks to their compact, muscular bodies that conserved body heat, but their large brains were what made them truly successful. They were the first to develop tools by carving stone. They then used these tools to hunt hairy animals like beer and deer. When they felt the need to cover themselves because of the cold, they used the skin of these mammals to keep themselves warm. This idea of ‘covering themselves’ made the discovery of clothes possible.

Although it is unknown when humans first started wearing clothing, anthropologists suggest the time frame was between 100,000 and 500,000 years ago. These clothes were made from grass, leaves, and animal skin. Clothing was generally draped or tied, but simple needles made of animal bone provide evidence of sewn fur and leather garments.

Cloth-making, as a result of neolithic cultures’ discovery of fibers over animals’ hides, emerged as a key technology.

Human development continued to evolve after the Cro-Magnons emerged around forty thousand years ago, making advancements in the dress of the Neanderthals. They developed finer and more efficient tools, and they learned how to make fire and cook food. Animal skins were laced together with hiding string, after being punched with awls and this is how the first dress ever came into existence.

Humans began weaving yarn 10,000 years ago, leading to the creation of fabric.

Scientists have discovered a 9,000-year-old linen cloth made of hemp in Anatolia. Although we don’t know how they made these fabrics, the tools and techniques must have been quite sophisticated based on how tightly the fabrics were woven.

Moreover, the Venus Figurines that were made 25,000 years ago allegedly have indentations on the fabric from the weaving process. The lack of evidence, however, prevents us from being certain of anything. Another interesting theory is that the first woven cloth made was most likely used to wrap a baby but again, you never know!

A 5,000-year-old Egyptian tomb discovered this somewhat elegant piece of clothing known as the Tarkhan Dress. This ancient Egyptian clothing was likely the high fashion version of ancient Egypt for its wealthy owner.

Over the past 50 years, it has been buried under a pile of rags and almost never discovered. This pile was not recognized for its significance until the late 1970s, when it was sent to the V&A for conservation work.

Trousers were more complex to make than the type of dress above, so they didn’t appear until later in time, most likely because of horse-riding lifestyles.

Scientists in Western China found these trousers in an ancient tomb they were excavating. This discovery felt more like a fashion show, since tassel cloaks, colorful boots were also found.

These trousers were made entirely from one piece of material with no cutting or coordinated stitching. What’s even more exciting is that the archaeologists also found underwear (most likely one of the first few) in the same tomb!

Not only were the tombs decorated and designed beautifully, but they showed a strong theme of sex that led scientists to speculate that the tombs were more than just functional. On top of that, other symbols and artefacts found suggest that the buried were preparing for a vibrant afterlife!

The word costume comes from the Latin word for outerwear, “consuetudo”. Besides acting as a means of covering one’s body and decorating it, costumes are also one of the most important non-verbal means of communicating one’s cultural identity as well as one’s position within the community and in the country of origin during any given historical period.

Dressing in costume is a distinctive manner of dressing that expresses one’s class, gender, nationality, ethnicity, occupation, and period.

As the term “costume” has become more limited, it is now used primarily for unusual or out-of-date clothing and for items intended to evoke a change in identities, such as costumes for theater, Halloween, or mascots.

Clothing used to be handcrafted before ready-to-wear clothing became widespread. The dresses for females were often made by females, and these business owners used to supply both elaborate and intimate costumes.

Clothing in the Ancient World

Climate in Ancient Egypt dictated clothing choices, both warm and dry, and outdoors was the way of life.

At first, cotton was used for making clothes, but since linen was deemed purer, cotton was abandoned and only linen was cultivated for clothing. Ancient Egyptians preferred wearing white only, but they did not mind a little detailing on the edges as well.

These people were well aware of wool as well, but since animal fibers were considered a taboo, they never thought of using it initially. However, this changed when Alexander the Great came into power. After that, only the priests continued to wear linen cloth in the temples and everyone else preferred wool cloth.

Ancient Greeks wore simple clothes. Originally, the garments were made from rectangles of cloth wrapped or draped; there was little sewing involved. In the past, woolen garments were the most common, so most clothing was white.

Throughout Greek history, both men and women wore chiton. Essentially, it was a rectangular piece of woolen cloth, large and rectangular, that wrapped around my body and covered my left arm while leaving my right face uncovered. Traditionally, it was fastened either by pins or brooches (fibula) to the left shoulder or both shoulders.

There was a finer cloth used in the making of the women’s chiton. Women’s robe called peplos and men cloak called chlamys was also famous. Women wore it around their bodies and held it on with pins or fibulas; the leftover fabric bent upwards. The women wore the mantle that was worn on top of the tunic, the himation, which was fastened around the shoulders, and the end of which was dropped forwards.

Almost all we know about Roman life revolves around the upper classes. Romish clothing fell into two main categories: amictus, which was rolled or draped around the body, and garments that went through the head.

Roman women wore light fabrics such as cotton and silk from India, and one item that could not be missed was the stole. A lot of these garments had wide sleeves and were girded in two places, under the chest, where a cingulum was located, and at the hip, where a succincta would rest. As for the women’s undergarments, they could wear subucules, loose dresses without sleeves, and strophiums, bodices constructed from nonstick fabric.

Greek men wore simple clothing. They used to wear short-sleeved tunics casually, and paired it with a sash when they had to step out. It was worn originally to the knee but became longer as time went on.

One of the most important items in the ancient Roman wardrobe was the toga, a long, loose-fitting woolen garment with an open back. As time passed, togas got bigger and more voluminous, and they could be worn in different ways.

According to historians, togas were first worn by everyone in Rome during both the Roman monarchy and the Roman Republic era. The toga was originally thought to be worn without undergarments. Surprisingly, only free Roman men citizens were allowed to wear togas, as other people wore tunics. It was, however, worn over a tunic by the 2nd century BCE, which then became the clothing standard for both men and women. Stolas, which were long pleated dresses similar to the Greek chitons, were worn by women as outer garments.

Were humans meant to be wearing clothes?

Since the human species evolved in a warm climate, we did not need furs or other coverings. However, as the temperature of earth fluctuated and people experienced ice ages, they started covering themselves with animal skin and leaves, giving others the idea of clothing.

Who created the first clothes?

Before modern humans arrived in Europe, Neanderthals lived there. It is believed that they started covering their bodies to protect themselves from the cold weather, and thus might be first ones to create and wear clothes.

Neanderthals, or cavemen, wore clothing that was made primarily from animal skins. Clothing was thick and heavy, especially for protection against exposure to the elements. Skins were fashioned into crude clothing, including shirts, pants, and even shoes, which were held together with a primitive form of string.

Now you know how clothes were made.

We hope that our guide about the history of clothes proved to be information for you. If you have more interesting information about this topic, feel free to share it with us in the comment section below!