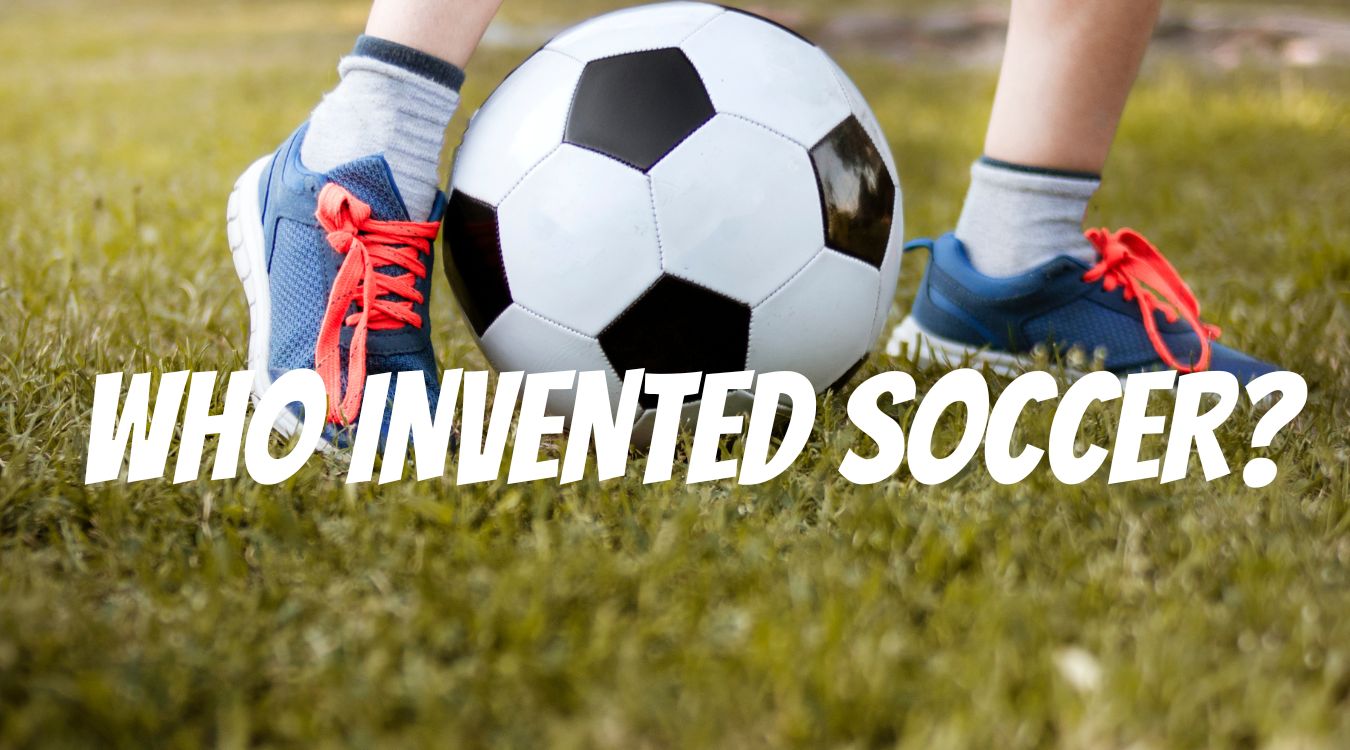 Who invented soccer? Soccer, also known as football is the second-most popular sport among the youth of America – almost everybody seems to love it! This game has been around for ages, and yet even when you ask the diehard soccer fans about who invented soccer they cannot give you an answer.

In this guide, we will walk you through the soccer history in detail and discuss some of the best soccer players of all time as well. Let’s get started!

Soccer is believed to have existed as far back as 2500 B.C. Almost all the civilizations including the Greeks, Egyptians, and Chinese all seem to have played football-based games around this time, which were only slightly different from modern soccer.

The ball was controlled with hands, feet, or even sticks in most of these games. Each side would try to hold onto a small ball. A similar game was played by the Ancient Greeks, called Episkyros. In both cases, the rules mirrored those of rugby rather than those of modern-day soccer. The goal in this captivating game is to move the ball over your opponents’ boundary lines. Their dribbling, persistence, and speed allowed them to achieve this.

There are many ancient games that are nonetheless relevant to the modern game of football, one of which is Tsu’Chu, which refers to as ‘kick the ball’. The game was reportedly played during the Han Dynasty (206 BC – 220 AD), possibly as a military training program.

In this game, the players would kick a leather ball in a net, which was made out of bamboo poles. The method of playing this game was almost the same as playing soccer. The players were allowed to use feet or other parts, just not the hands.

A Mayan game called Pok a Tok and an Aztec game called Tlachtli were played throughout South and Central America as far back as 1600 BC.

The historical evidence for this game is surprising considering it was almost 4000 years ago. It is believed that about 1,300 court sites have been found in Central America, and even some of the rubber balls that would have been used by these players have been found in bogs there almost perfectly preserved.

This game was played on an I-shaped court rather than a rectangle and the game featured two teams that had to keep the ball in the air and not use their hands to attempt to get the ball to their opponents’ end.

Surprisingly, it was played for religious reasons rather than for recreational purposes!

Even though it is difficult to draw a direct connection between this game and the modern game, it provides strong evidence that a “kickball game” was played long before it was obtained in the rest of the world.

Traditionally, English town residents played “folk football,” in which pigs’ bladders instead of a soccer ball were kicked around the streets. It would take place on Britain’s roads, with no real boundaries between inside and outside.

Football matches in Great Britain were often contested by two quite large teams with a handful of players on each team trying to hit the ball into the goal of the other team. Nonetheless, the rules were not standard, so anything could happen, and sometimes the play was violent.

As industrialization took hold, folk football declined because the workers hardly got any free time. Additionally, the violence in the game was also a major factor behind it not being so successful.

The Rise of Football Association

Today’s game of modern soccer is credited to the Football Association, an organization founded in the United Kingdom in 1863. Ebenezer Morley is called the father of FA, and was also the founder of Barnes Football Club. In the same year, the first ever soccer match was played between Barnes Football Club and Richmond Football Club.

To this point, this game has been played in many different variations, and the rules have varied for each specific match. Immediately prior to the match, the teams gather and decide on the rules that will govern the match.

In 1880, the FA established a standard body of soccer rules for the game, which subsequently spawned professional clubs that exist to this day. Following the formalization of these rules, other countries slowly started incorporating them, and England is rightly credited with creating modern soccer as we know it. In Italy and Spain, for instance, the term FC is used as a suffix or prefix with their official names, indicating the English influence.

A governing board called the International Football Association Board (IFAB) was formed in 1886 with its primary purpose being to design and establish the rules and laws of the game. Even today, the game is overseen and governed by this board. It took until 1904 to form FIFA (International Federation of Association Football) as the leading governing body for soccer worldwide. FIFA and IFAB work in tandem today, but IFAB tends to keep out of the media spotlight and generally avoids controversy, while FIFA has become an extremely controversial, but vital body in the governance of sports across the globe.

Major league soccer was formed in the United States later in 1995.

People today are able to witness the magic of modern soccer through their passion and fervent support for the teams they support and their home nations. Sports are getting more and more attention as time goes on, and players’ salaries are increasing at incredible rates.

Women also played soccer across the United Kingdom in the 1880s. It wasn’t long before women’s soccer was becoming popular, events being held all over the country, much to men’s chagrin.

Initially, people were horrified that women would get involved in such a ‘masculine sport,’ which incited riots regularly. Women’s matches would spark pitch invasions as well. Back then, soccer was much more violent and physical than it is today.

It took the full force of this resistance to win the first women’s soccer game. The first women’s team was founded by Helen Graham Matthews in 1881. Its headquarters were in Edinburgh, Scotland, and was known as Mrs. Graham’s XI. Women’s soccer players were often forced to hide behind false names at that time to avoid backlash.

When unruly spectators entered the soccer field in the 55th minute, their first significant match was abruptly canceled. Sadly, the team did not recover fully from this game which attracted a lot of unhelpful media coverage.

Football was introduced to the African continent by British colonial forces, missionaries, and traders in the 1800s. The game quickly gained popularity in schools, along the railways, and even in the military. Around the same time, Sheffield Football Club was created that focused on developing better cooperation among the teammates.

It was in the 1880s that the first professional teams were organized in Africa, and it was England versus Scotland that played the first international match in 1872.

During the 1888 season, the first full league championship was held and around this time, several soccer clubs came into existence as well. Then in around 1900 after the interest of several countries in this sport, several leagues began popping up all around the world.

After half a century, football maintained its popularity and FIFA had 208 members in every corner of the globe at the end of the 2007 FIFA Congress. Three nations have been selected to host the 2026 World Cup: the United States, Mexico, and Canada.

The World Cup will be held on the continent for the second time. The 1994 World Cup was held across nine cities of the United States.

Best Soccer Players in the World

He has been the highest-ranking member of this list for the past decade, and at 33, he still does not seem to slow down anytime soon.

Messi has 24 assists and 27 goals in all competitions, and he is hoping to lead Barcelona to a Champions League title for the first time since the 2014-15 season.

Ronaldo does not seem to slow down as well. Despite being 35 years old, Cristiano Ronaldo has scored half of Juve’s goals this season, scoring 28 goals and making six assists during his 28 appearances in the league and contributing to 39 goals in all competitions.

Ligue 1 side and one of the richest clubs in the world, Paris Saint-Germain, is home to Brazilian professional footballer Neymar. Neymar is considered to be one of the best-known players of all time.

The Brazilian footballer was twice recognized as the South American Footballer of the Year, in 2011 and 2012. He joined Barcelona in Europe soon after. During his career, he won a number of awards, including the La Liga Best World Player Award, the Copa America Golden Ball, and the FIFA Confederations Cup Golden Ball.

A forward for Serie A club Juventus, Paulo Dybala is an Argentine professional footballer. Many consider him one of the best players in the world at the moment in the position of winger.

Around the world, millions of fans follow this handsome hunk. Aside from being a Serie A team player of the year, he’s also an Serie A most valuable player and a Coppa Italia winner. The striker has deep blue eyes and an innocent appearance.

Now you know who invented soccer!

We hope that the guide proved to be informative for you. Have you ever been to a Fifa World Cup tournament? Tell us all about it! Also, if you have more relevant information that you think can benefit our readers, feel free to share in the comment section below.

Who Invented The Toilet?

Who Invented The Hoodie?