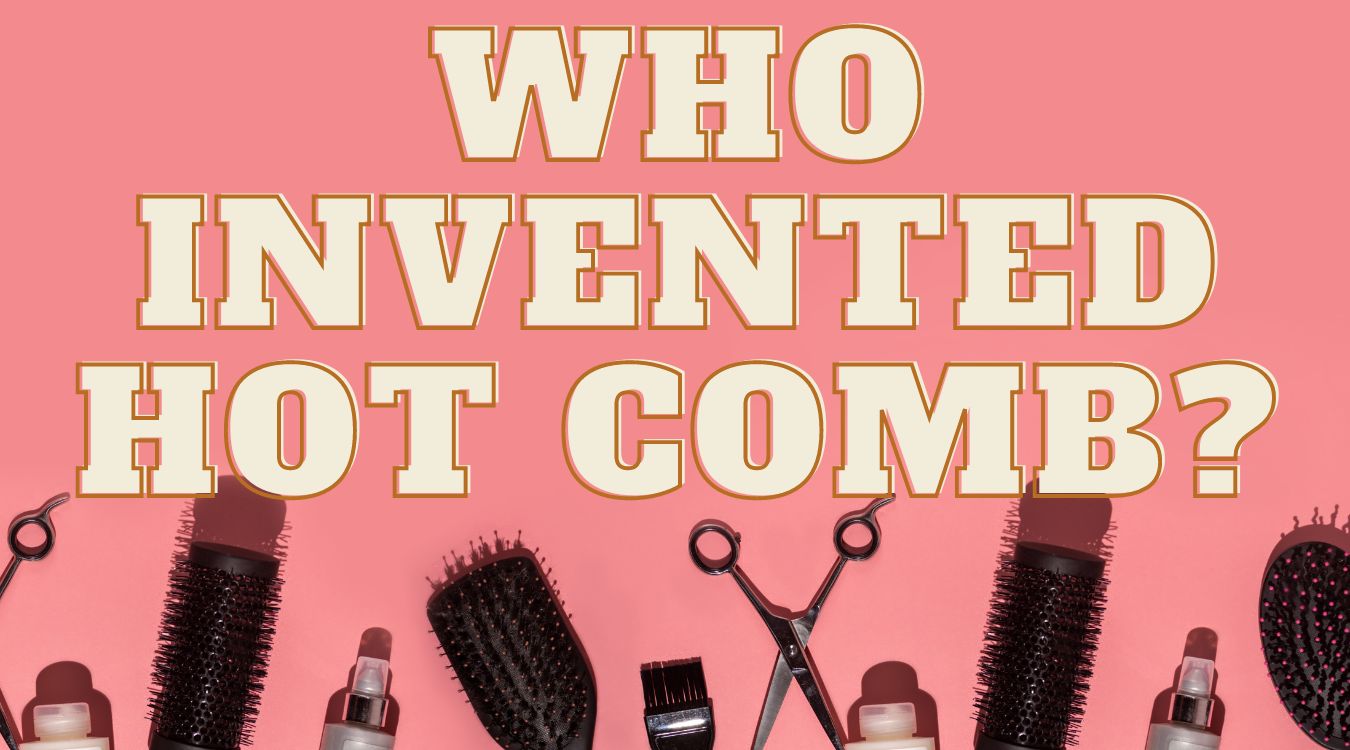 Who invented the hot comb? Hot combs have been used for decades as hair tools. The heated comb was invented in the early 1900s, but there have been numerous attempts to improve upon them that eventually led to today’s hot combs tools.

A hot comb or a pressing comb straightens hair by heating the device to a certain temperature. This is typically done in a professional setting. Nevertheless, hot combs are now easier to obtain than ever before, and people with curlier and kinkier textures, especially in the African-American community, have been using them for years.

Most people believe C.J. Walker invented the traditional hot comb. However, that is not entirely true. She did play a significant role in making the product as it is today, but the idea of the hot comb was someone else’s. It was another African American inventor named  Annie Turnbo Malone.

The invention of the first hot comb can be difficult to pinpoint. Many believe that a Frenchman named Marcel Grateau introduced it in the 1800s. However, Rather than a hot comb, Grateau is listed by the European Patent Office as having patents for an “iron” to wave hair and iron to curl hair.

This invention may very well have been patented, as it was marketed to white women by popular American catalogs such as Bloomingdale’s in 1886. Walter Sammons patented hot combs in 1920 and Clara Grant of St. Louis patented them in 1925.

Role of Annie Malone in the Invention of Hot Comb

Annie Malone was orphaned as a child and born into enslaved parents in 1869, in Metropolis, Illinois. Belonging to an African American background, she clearly understood the impact of grooming and the personal style of women. She closely witnessed how other African women at that time struggled to go to a salon to get a hair treatment due to both shortages of time and money. This led them to have scalp infections.

Malone wanted to come up with something that would help solve the health-related problems as well as style the coarse curly hair. When Malone was young, she took great pride in styling her sisters’ hair, which inspired her to teach other black women how to do the same.

Because of that, they could adapt well to a culture that valued beauty based on American standards (we are talking about straightened hair, of course).

The first business she started appeared to be successful after she introduced products that improved scalp health and promoted hair growth. In 1902, she founded Poro College in Missouri after having been successful in Illinois.

Poro College also provided employment opportunities for thousands of African Americans, particularly women. The women who would work there were referred to as Poro agents, and their job was to market and sell the products across the country.

Madame C.J. Walker became one of these agents later on.

Poro brand’s value soared in the 1920s, making Annie Malone one of the country’s wealthiest African American women. However, not so long after that, the success of the company began declining as a result of the Great Depression and several lawsuits against the brand. Malone passed away in 1957, at the age of 79.

From 1905 to 1907, Walker sold Poro products from Denver, Colorado, and later began making her own products of a similar nature. She later founded Lelia College in Pittsburgh, Pennsylvania where she taught women how to become beauty agents – hair culturists. Her beauty empire made her America’s first self-made millionaire woman!

Despite not inventing the heated metal straightening comb, Walker regularly used it for hairstyling with her “hair culturists.” A patent for her invention was filed after Madam C.J. Walker widened the teeth on the hot comb to make it more useful for African American hair.

We should mention here that despite the fact that Madam C.J Walker did not originally invent the hot comb, she played a significant role in improving and making the product available to the masses.

Who was the first person to straighten hair?

Why was Madam CJ Walker’s invention so controversial?

As a consequence of slavery, the hot comb became an extremely controversial invention because many questioned whether it helped or hurt the Black community. After making the hot comb more useful for African Americans’ hair, Madam C.J. Walker patented the idea of enlarging the teeth.

What is the oldest comb?

There are combs dating back to 1,500 B.C. that resemble louse combs today. Delousing was done in Egypt with royal combs from the time of Pharaohs. The combs used most of the time were two-sided: the comb with the coarse teeth would untangle knots in the hair, and then the comb with the fine teeth would remove lice and eggs. A straightening comb was developed quite later in time.

Is a hot comb bad for natural hair?

A flat iron is better suited to people whose natural hair is hard to manage, or thick and unruly. In general, if your natural hair is difficult to heat-taint, if it’s naturally straight, or if it doesn’t need much effort to remain straight, a hot comb is your best option.

When was the first electric flat iron invented?

It was during the 1880s that electric iron became widely used in American homes. The electric flatiron was patented by Henry W. Seeley in 1882. He heated his model using coils that were integrated into a rack.

Now you know who invented the hot comb. If you want to thank someone for developing a tool that allows you to have a smoother hair texture, it’s Annie Malone and Madan C.J Walker. If you have more relevant information that you think can benefit our readers, feel free to drop it in the comment section below.