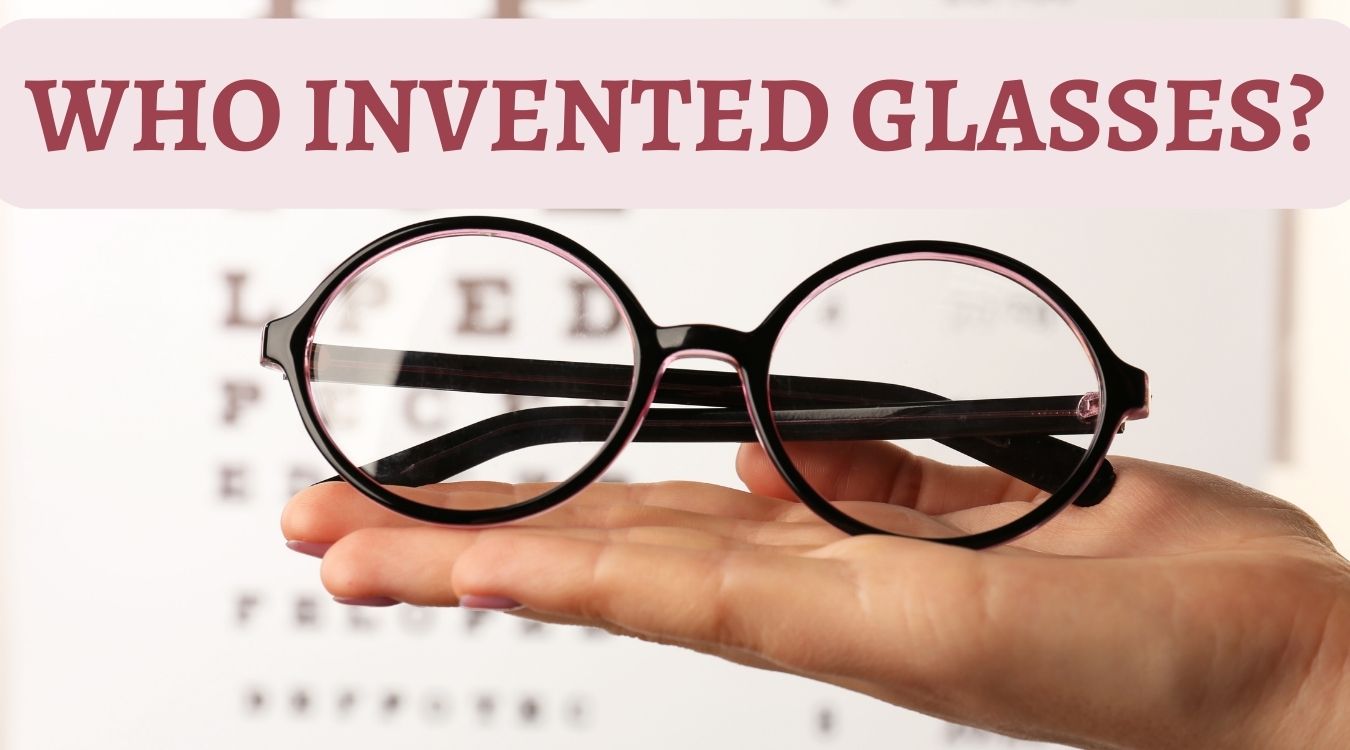 Who invented glasses? During the 13th century in Italy, Salvino D’Armati is said to have invented eyeglasses.

The idea began with two convex lenses fitted into a wooden frame and attached to a shaft with a rivet. It was worn to enhance vision. Despite that, this is just one of many stories about how glasses got their name.

So if you wish to understand who invented glasses, you will have to look into the history of eyeglasses first. Let’s get right into it!

When Were Glasses Invented

Originally, glasses were made in the 13th century, but they weren’t common among people until the 18th century. However, nobody knows the exact date of the invention of prescription glasses or tinted glasses. There have been reports that the Romans were the first to develop small magnifying glasses to read texts.

The first glasses didn’t fit the wearer’s face, and they had to be held in place once they were put on. The nose bridge and temples of eyeglasses were then introduced for keeping them in place and preventing them from falling off the face.

What Materials Were Initially Used to Make Glasses?

There is no universal model for eyeglasses or corrective lenses; they were different across different cultures.

Each of these inventors had a different idea on how to improve sight by using certain materials. The ancient Romans, for example, crafted eyeglasses from glass.

The Italian inventors soon realized that rock crystal could be made concave lenses or convex lenses to provide different kinds of visual aids to people with varying degrees of vision problems. These days, the lenses of most eyeglasses are made of plastic or glass and the frames can be manufactured from metal, plastic, wood, or even coffee grounds.

Following the invention of the “over-the-ear” device, glasses developments started to speed up. A bifocal lens was invented by Benjamin Franklin, which allowed a person with near-sighted and far-sighted spectacles to wear one pair instead of two. This added to the versatility of glasses. At first, he assembled the lenses by cutting them in half and putting them together.

The “scissor spectacles,” which could be stowed in one’s pocket but pulled out at any time when necessary, were also popular during this time. Pocket glasses that could be folded up like scissors were the answer to men not liking to wear glasses all day.

Glasses were still made by hand and not obtainable by everyone during the 19th century. After the industrial revolution, both frames and lenses were mass-produced, making obtaining eye correction by prescription lenses and prescription sunglasses much more accessible to working people. Plastic lenses were introduced way later in the 1980.

Additionally, cylindrical lenses were developed in the early 1800s for treating astigmatism. The technology for eyeglass lenses has been consistently improving since then.

Eyeglasses with bifocals have two distinct optical powers on each side of the eyeglasses. Patients with presbyopia usually need bifocal eyeglasses. People who are nearsighted and farsighted may also benefit from this procedure. Nearsightedness is corrected with the lower half of the lenses; farsightedness is corrected with the upper half. Astigmatism can also be corrected by these lenses in conjunction with other refractive defects.

Bifocal lenses or glasses were invented in 1784 by Sir Benjamin Franklin whose vision was deteriorating. His eyestrain made switching between lenses difficult. This led him to create bifocal lenses. Initially, there would be a sharp switch between upper and lower lenses when the two lenses were combined directly. The problem was solved by Louis de Wecker, who fused the sections of lenses together at the end of the 19th century. The term bifocals was coined in 1824 by Peter Williams who invented trifocal lenses.

However, bifocal lenses have some disadvantages as well. While they offer the advantage and convenience of using two lenses at the same time, they can also be quite difficult to use. Headaches and dizziness may be caused by the sharp transition between the upper and lower lenses. Users must learn to move the head or book rather than the eyes to adjust to the small area of view offered by the reading portion of lenses. Using computers can lead to muscle fatigue for users, as monitors placed directly in front can result in unusual angles and head movements. Monofocal lenses can alleviate this problem.

Many people think that bifocals are only for elderly people, but this isn’t the case. Bifocal glasses were invented to help the elderly with their vision correction and people started believing that wearing glasses of this type were only for the elderly. If you don’t want to appear old by using lenses, choose a frame with a more youthful appearance or a frame that looks professional. Avoid the dull black frames. Nowadays, there is a wide variety of lenses available, from aluminum to titanium.

The first progressive lens was invented in 1959 by French engineer Bernard Maitenaz. It was the first lens of its kind that had no line between the bifocal eyes.

As opposed to having specific sections for specific distances, progressive lenses combine several methods to provide a natural and comfortable viewing experience. The top part of these lenses has the most distance due to an invisible channel running through the middle. Gradually, your eyes begin to see up close as they move down the lens. We want them to feel comfortable at any distance.

The progressive lens was the face of the future when it was introduced as a product, and as time has gone by, its popularity has grown. Several versions of this type of multifocal have been developed since the Varilux, and as technology advances, better and better progressive lenses will be released.

Progressive lenses, including the Varilux X, use cutting-edge technology in order to eliminate much of the peripheral distortion.

In the present day, technology has evolved and examples of modern glasses are impressive. Often, lenses are made of lightweight, super-thin materials that do not break or fog up. Additionally, frames today are very comfortable. If you are interested in modern glasses that can correct your vision, you should have your eyes examined by a doctor who can prescribe the best lenses.

Online, you can order glasses as well as sunglasses and fashion frames that have clear glass lenses that do not correct vision. A variety of manufacturers offer a wide range of options at different price points.

Now you know everything about the history of eyeglasses and how early glasses were made!

We hope that this guide proved to be informative for you. If you have more information about eyeglasses, feel free to share it with our readers in the comment section below!

Who Invented The Hot Comb?