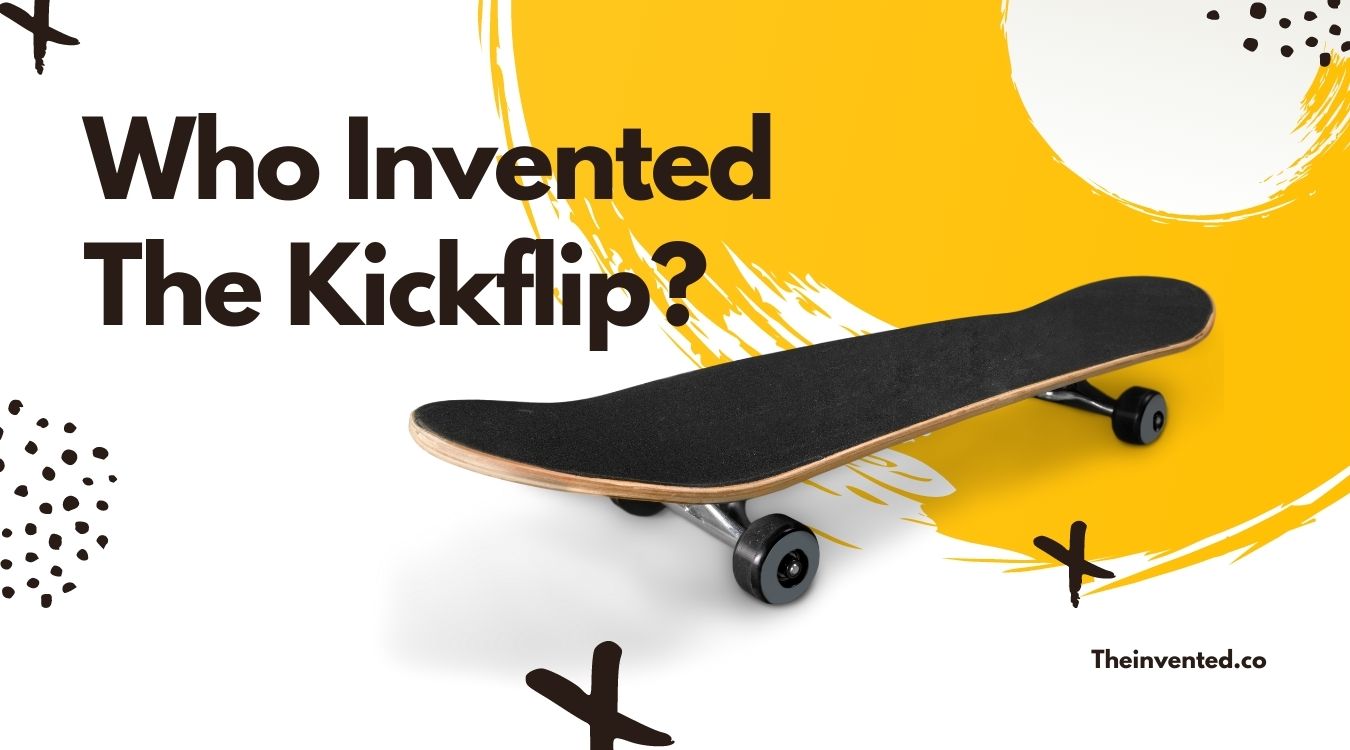 Ever wondered who invented the kickflip? A kickflip is a skateboard trick that involves the skater popping up into the air and spinning their board 360 degrees using their feet. In a kickflip, the skateboard is spun mid-air toward the skater. Skateboarders perform this trick on flat ground and also over obstacles, such as steps or ramps.

But who invented the kickflip? And how long has this skateboarding trick been around? And no, it wasn’t Tony Hawk… Let’s find out!

Origin of Kickflip – Who Invented The Kickflip?

Skateboarding’s first aerial trick was the kickflip, invented by Curt Lindgren in the 1970s. This is where the skateboarding legend Rodney Mullen came into play. Professional skateboarder Rodney Mullen is an American skateboarder who specializes in freestyle skateboarding and street skating. Originally, he called it the ‘magic flip’. The event is viewed as one of the defining moments in sports, as it led to a stream of innovation and creativity.

There are also some other (but less common) types of kickflips (magic flip) including double kickflip, hardflip, varial flip, backside flip and triple flip.

The cool people in the 1970s used to perform the ‘old school kick flip’.

During skating, the skater stands on top of a skateboard in the middle facing forward with two feet side by side. After the skater placed his or her foot slightly under one side of the board, he or she would jump up in the air, lifting the board with their toes. The board flipped completely, and skaters would land on their boards.

The History of Skateboarding

The sport of skateboarding, as we know it today, began in California in the late 1960s when surfers used schoolyard banks to simulate waves on flat days – hence the term ‘sidewalk surfing’. Eventually, surf companies began to make skateboards. It was the 1970s when California experienced a severe drought.

After the swimming pools were drained, skateboarders rode on the smooth, empty grounds. Thus, vertical transition skating began. During the 1980s, skateboarders including Christian Hosoi, Steve Caballero, and Tony Hawk pushed Vert skating to its limits. Tony Hawk is quite possibly the most well-known skateboarder due to the famous video game Tony Hawk Pro Skater.

Parallel to those feats, Rodney Mullen of Florida wowed the world with his incredible array of tricks on flat ground. Known as the most pivotal innovator in the history of skateboarding, Rodney invented many complicated tricks that would influence contemporary street skating.

Skateboarding’s allure increased exponentially during the 1990s because of advances in home technology, and board shapes stabilized around the duo-directional, ultra-functional popsicle shape that is dominant today. Among the most popular action sports today is skateboarding.

In terms of difficulty and consistency, competitive skateboarding has advanced to the point that 80 skateboarders from around the world will compete for medals in the disciplines Street and Park on the world’s biggest sporting stage.

How to Perform a Kickflip

The most popular skateboarding trick invented in modern history. Invented by Alan “Ollie” Gelfand, the ollie is the cornerstone of modern skateboarding. Ollies occur when you strike the tail of your board with your foot and slide it through the air with your feet. Its variations include the more common ones that we have outlined below.

This trick involves doing a kickflip but also making sure to rotate a full 180 degrees backside before riding away in the fakie stance. Flip tricks are quite possibly the most fun to learn.

An ollie in which the tail strikes the ground at a 45-degree angle, reversing the board’s axis 180 degrees underneath the skater’s feet as a result of the impact energy.

It’s basically a kickflip spun the other way. Because heelflips require less precision and are extremely unforgiving if done incorrectly, they are less popular than kickflips.

The skateboarder uses the various sections of the board (slides) or metal gear undercarriage (grinds) to attack the edges of the terrain he or she is tackling. It is common to combine slides and grinds with other tricks into or out of them so as to create a variety of more challenging and complex combinations!

Skateboarding mid-flight requires more style than necessity. On either hand, you can grab each section of the board to demonstrate control and finesse through flourishes, tweaks, and stretches.

When was skateboarding invented?

In California, skateboarding first appeared in the 1950s. Although it’s difficult to pinpoint the very first skateboard, it was a sport created by surfers interested in something to do during low surf. From 1963 to 1965, it peaked in popularity in the US, before crashing in 1965.

Who was the first person to skate?

A wooden board was fitted with rollerblading wheels by Bill Richards in 1958. It was known as the Roller Derby Skateboard and was first sold in 1959. The wheels were clay and the trucks were extremely thick.

What year was the first ollie?

A hands-free aerial maneuver called an ollie is one of the most crucial tricks in contemporary skateboarding. Alan (“Ollie”) Gelfand created it in 1978 when he found that by slamming down on the kicktail while simultaneously sliding his front foot forward, he could jump onto the board.

Norwegian skateboarding has a checkered past, as it was banned between 1978 and 1989. Foul Play, an original series by the Olympic Channel, explores this ban. The first skateboards were sold in Norway in 1978 when skateboarding was introduced there for the first time. However, sales were brief.

This brings us to the end of our guide on the invention of the coolest skateboarding trick – the kickflip. Thanks to Rodney Mullen for the best skate trick invented in the 1970s.

We hope that the information mentioned above proved to be useful for you. If you have more information about flip tricks that you think might benefit the readers of this article, feel free to let us know. Also, remember to check out our other articles here.

Who Invented The Stapler?

Who Invented The Flying Shuttle?