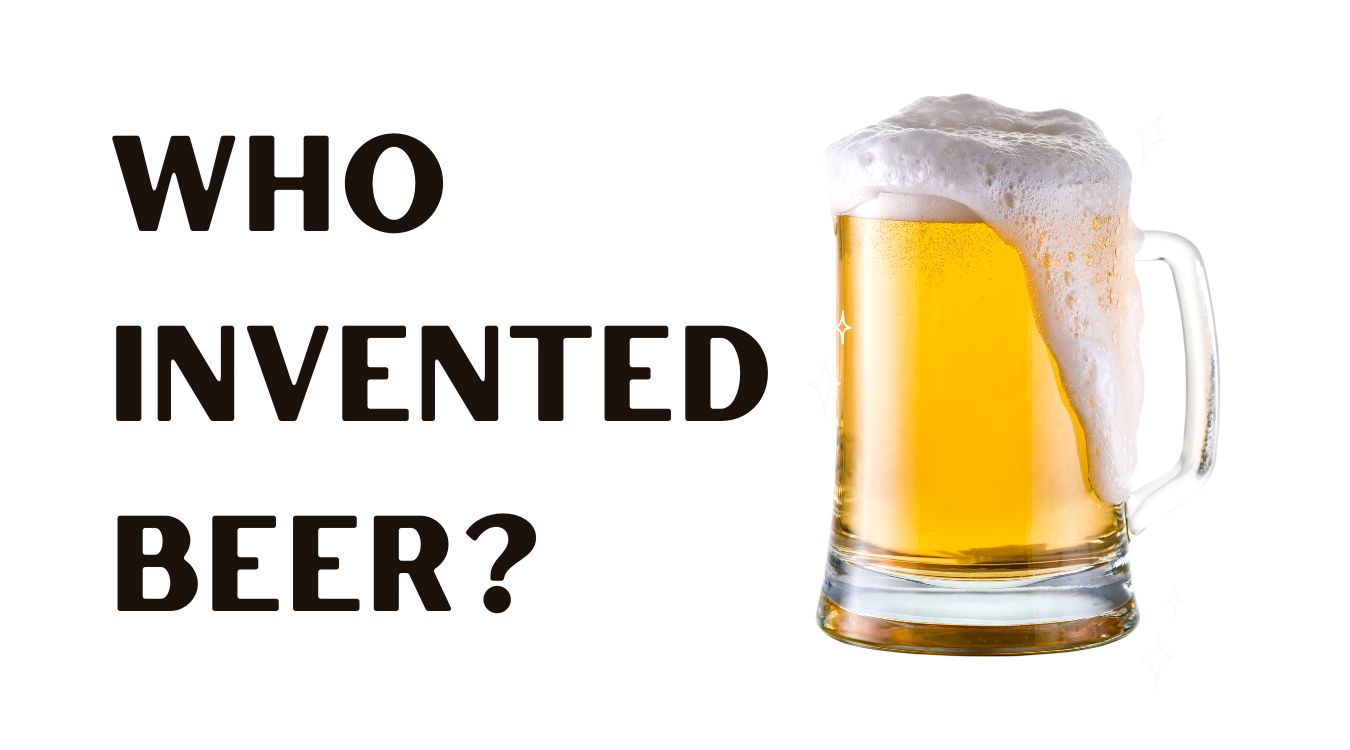 There is nothing more refreshing on a hot day than a cold, fizzy beer. Beer’s light and bright flavors (especially if it is craft beer) and bubbling carbonation make it the perfect way to cool off in the heat.

But who invented beer? How long has beer been around? Let’s find out!

When Was Beer Invented

Beer has been around for a long time, but there is no short answer to who invented beer.

Beer was historically produced from barley between 3500 and 3100 BC at the Zagros Mountains of western Iran, known as Godin Tepe. Apart from the barley beer, several other types of beers were produced by ancient Syrian priestesses in Elba back in 2500 BC, including those made for religious ceremonies.

A beer called Kui was first produced by ancient Chinese in 7000 BC. During this time, Babylonians and Sumerians probably already knew about beer. Surprisingly, most breweries were owned by women. A clay tablet from ancient Persia states that beer was also highly regarded in ancient Persia at least 7,000 years ago.

Brewing was strictly controlled in ancient Egypt since the gods used it as an offering or as a medicine. The Greeks were intrigued by what the Egyptians had taught them. Ancient Rome also used it until it was replaced by the wine as the preferred beverage (more on this later).

A major reason for ancient times’ popularity of beer was the uncertainty of the water quality. They did not have filters like us (no pun intended), and thus it was thought that drinking plain water was frequently associated with diseases like cholera, and beer was an important part of prevention.

In the area between the Euphrates and Tigris rivers, beer was regarded as one of the most important ingredients of their diet. As a consequence of its intoxicating effects, they called it “the divine drink”. Researchers also found some evidence of beer commercialization at that time, including the Alulu beer receipt.

Beer brewing began in Mesopotamia, which was also known for beer consumption by the people of Babylon, the great city.

There were over 20 types of beer produced in Babylon around 3,000 BCE. This was probably because the Babylonians considered ancient beer to be a true gift from the Gods. The beverage was also seen as a sign of wealth.

The amount of beer each citizen could drink every day was determined by his wealth. Many people were paid in beer for their work, instead of money, because the drink was so respected. It is also important to note that beer at that time was thick, and not as easy to drink as it is now.

Among the ancient Egyptians, Tenenit was associated with Meskhenet, goddess of childbirth, as the goddess of beer. The name Tenemu comes from the Egyptian word meaning beer. Humans learned how to brew beer from the great god Osiris, who taught them himself. Early on, it was brewed by women, but men later took over.

Egypt’s most popular brew was the honey-flavored Heqet (Hecht). Beer was frequently offered as compensation for labor, and the Giza workers were reportedly given three beer rations a day.

As a result of implementing the first-ever beer tax, Cleopatra VII lost a lot of her popularity. It was considered medicine by the ancient Egyptians and was used in over 100 remedies. Thus, they felt that a tax on it was unfair.

Beer In Ancient Greece And Rome

The beer came to Greece from Egypt quite early, but beer brewing did not become a huge success right away.

The popularity of wine during those days in Greece made it seem like a blessing from God. This made people think that beer was a barbarous drink that should only be drunk by people of the lower classes. Some of the old paintings and sculptures reveal that Romans were one of the few old civilizations that started brewing and cherishing this drink quite early on in history.

On the outskirts of Rome, beer gained popularity because of it being cheaper than the other drinks, and European legions brought beer to the north. Soldiers who traveled long distances would be able to enjoy a cup of refreshing beer. According to the Greek general and writer Xenophon, there used to be large stores that stored wine made from barley, where the grains of barley malt lay floating in the drink.

It is considered that the Germans started brewing beer as early as 800 BC. During excavations at a tomb in Kasendorf, Bavaria, the first beer jugs were found. Beer was made at home by women as part of their daily diet – what a great time to be alive!

With time, Christian monks assumed control of the craft brewing industry. Kulmbacher Monchshof Kloster, established in 1349 in Kulmbach, began brewing many different types of beer, including Schwartzbier, which is now their best-known product.

In 1516, the Germans passed the Reinheitsgebot, their purity law with strict regulations on which ingredients were legal for breweries to use, including water, hops, barley, and yeast. Additionally, they believed that this beverage is an essential part of a healthy diet and instituted its daily consumption.

Kalewala is a Finnish folk tale from the 17th century that has survived to this day. In it, beer production is described and it is stated that the gods knew that a brew would keep them healthy, happy, and at peace, so they brought it to earth.

Breweries started to emerge quite rapidly in North America’s colonies. There was a brewery in New Amsterdam that was the first in the new world. Among the brewers were George Washington and Thomas Jefferson. In fact, Washington was so fond of brewing beer he even wrote his own version of the recipe!

During the 19th century, beer was one of the most popular alcoholic beverages in the world, and everyone regardless of class and status loved drinking it. Then, gradually several changes in the method of brewing were introduced, such as fermenting the beer with yeast.

The first Oktoberfest took place in Munich in 1810. Historically, it originated as a result of occasions and festivals that included mostly wine.

In 1810, Ludwig, the Prince Regent of Bavaria, and Therese of Saxony-Hildburghausen got engaged and they invited the whole city to attend a horse race at that event.

After more than two hundred years, it has become the largest beer festival in the world. Each year, countless people from all around the world gather there to celebrate their love for beer – German beer to be precise.

Louis Pasteur, the famous scientist who discovered fermentation, was the first to discover yeast. In his writings on the importance of yeast in controlling fermentation, he was credited with the single most important discovery for reproducing beer batches with consistency. As the breweries were growing in the world, so were the processes of preserving the beer. It was also around this time that some new methods of chilling the beer were discovered.

However, just a bit later, Portland prohibited all forms of alcohol in the state. Not so long after this prohibition, other states followed, as the authorities wanted to make the nation alcohol-free.

The federal prohibition act was enacted in 1920. Drinking was prohibited, but since the love for beer had been deep established by then, some people kept purchasing from the secret underground breweries that were run illegally.

Today is a good time to be alive.

Fortunately, there are no such bans in most parts of the world, and you can drink whatever you want and whenever you want to do it. Beer is also not limited to just a few types today.

You now know who invented beer – let us drink to that!

Who Invented The Electric Guitar?