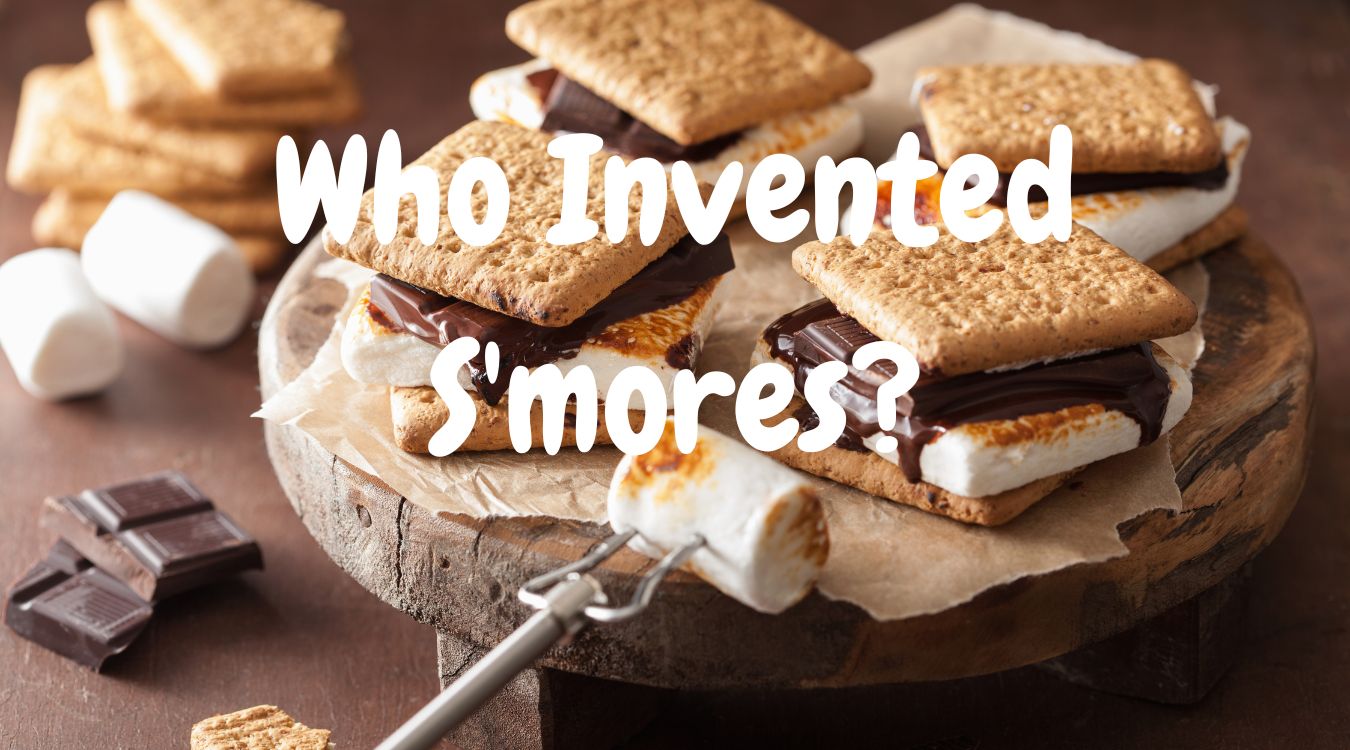 Who invented Smores? S’mores are the ultimate humble treat that everyone craves as soon as the bonfire season starts. Despite their simple appearance, s’mores actually have a long and interesting history. The recipe is as old as history itself. It may have been started by a group of outdoorsy girls, but it dates back hundreds of years. Additionally, all ingredients in Smores have a fascinating history.

Let’s have a look at who invented S’mores and their incredible history!

S’mores recipe was first published in 1927 in Tramping and Trailing with the Girl Scouts by the Girl Scouts of America. According to reports, it was written by Girl Scout troop leader Loretta Scott Crew.

The guide included tips on how to spend time in the wild and some suggestions for cooking over an open fire in the woods. A few years later, the recipe for s’mores was credited to troop leader Loretta Scoot Crew, which called for 16 graham crackers, 16 marshmallows, and 8 chocolate bars. The book suggested that by sandwiching a toasted marshmallow between graham crackers and adding a chocolate bar sandwich (preferably plain chocolate), you will be able to produce a tasty treat that will leave you wanting more. Some people prefer a roasted marshmallow instead.

The original recipe included 16 graham crackers, 16 marshmallows and eight bars of chocolate. Several Girl Scout publications referred to this recipe as ‘Some more’ until 1971. The name shortened afterwards and became ‘S’mores’.

Three ingredients are necessary to make S’mores; marshmallows, chocolate, and graham crackers. Let’s have a look at a brief history of each.

A larger scale of marshmallows became available around 1900. This was sold as penny candy in tins. By 1911, the wooden machine parts used for shaping marshmallows had been replaced by steel ones. Over time, gelatin and other whipping agents replaced mallow root. Today, it is mostly corn syrup, gelatin, and cornstarch.

Almost 4,000 years ago, chocolate was consumed as a drink in Mesoamerica, which is present-day Mexico. It was brewed from cocoa, mixed with spices, and served as a bitter liquid. It was considered a medicinal plant and was cherished during religious rituals and other special moments.

It is believed that chocolate originated from the Aztec word ‘xocoatl’, a term translated as a bitter drink made from cacao beans.

In the Amazonian rainforests, the first people who recognized the value of chocolate were Mesoamericans. When the Aztecs and Mayans discovered chocolate, they regarded it as a divine gift, and prized it so much that it became a form of currency.

Aztecs drank chocolate in much the same way as Mayans, although they preferred it sometimes cold. Legend says that Quetzalcoatl, the Aztec god who brought cocoa to earth, was banished from paradise for giving it to mankind.

For a long time, chocolate was viewed as an unrelated bitter beverage but when sugar was added, a whole new world opened up.

Spain considered chocolate medicinal when it entered the country. There were many uses for it, including treating fever, lowering body temperature, aiding digestion, and alleviating pain. Chocolate was realized to be too wonderful to be used as medicine alone. The first source of caffeine in Europe was chocolate, way before coffee or tea.

With the spread of chocolate in Europe, the demand increased. In order to meet the demand for cacao, plantations grew, and enslaved people were used to produce it.

It was England’s Englishman who invented solid chocolate in the 1850s by mixing cocoa butter with sugar and cocoa powder. That’s when chocolate came into being as we know it today. More than 3 billion tons of cacao are used to make 35 billion dollars worth of chocolate today.

Furthermore, he believed diet played a key role in suppressing these ideas. According to him, vegetarian diets high in fiber could suppress these thoughts.

He thought that meat and fat contributed to lust, and he favored unsifted wheat flour over refined flour.

Graham created Graham bread with unsifted flour based on this preference. This led to Graham crackers being created.

The Graham cracker may have been invented by Revered Graham himself or not. Several sources claim that he did so in 1829; however, others claim the society did not exist until 1882, 31 years after his death.

According to Merriam-Webster, a s’more consists typically of toasted marshmallows and chocolate pieces sandwiched between two graham crackers that date to 1974.

Every year, Americans buy 90 million pounds of marshmallows, according to The S’mores Cookbook. S’mores constitute approximately half of the marshmallows sold during the summer.

The popularity of the original s’more has inspired food manufacturers to create Pop-Tarts, cereals, ice cream, and even Goldfish based on chocolate, marshmallow, and graham cracker.

The dessert’s popularity is also being capitalized on by restaurants with a variety of downright unique iterations, including s’mores French fries, martinis, and macarons.

S’mores are reportedly more popular in Grand Rapids, Michigan than anywhere else in the country.

S’mores (even though they are not much of a healthy snack) are estimated to account for about half of marshmallow purchases during summer in the United States.

The 10th of August is National S’mores Day!

Adding something extra to your s’more will make it taste even better! Add banana, strawberry, peanut butter cup, or marachino cherry to the mix of your s’more and you’ll be amazed!

Now you know about the history of everyone’s favorite treat; S’mores – an invention by the girl scouts that was first published in the Tramping and Trailing magazine!

We hope that this guide answered all your questions about S’mores. If you have more relevant information that you think might benefit our readers, feel free to share it in the comment section below!

Who Invented The MRI?

Who Invented The Telescope?