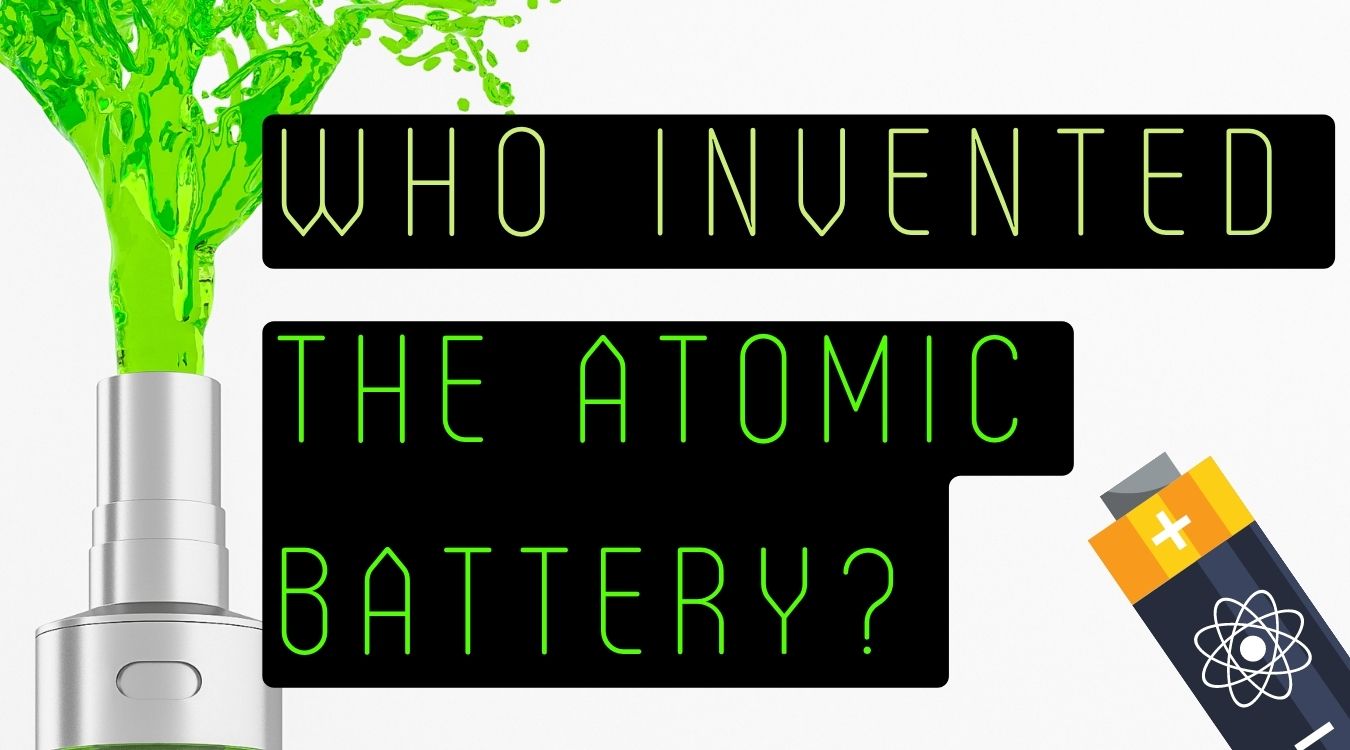 Ever wondered who invented the atomic battery? A radioisotope generator, also known as an atomic battery, a nuclear battery or a tritium battery, is a device that generates electricity by using the decay of a radioactive isotope. Their use of this energy is similar to that of nuclear reactors, but they do not require a chain reaction. The batteries are much more expensive than other batteries, but they last much longer and possess a higher energy density which helps to produce electric energy more efficiently.

Therefore, they are mostly used in equipment that can operate without human assistance for extended periods of time, such as spacecraft, pacemakers, underwater systems, and remote scientific stations.

But who was the genius inventor of this technology? Are atomic batteries even safe for the world? Let’s find out!

Who Invented Batteries? Who invented the atomic battery?

Nuclear battery technology began in 1913 when the first beta cell was demonstrated by Henry Moseley. Over the course of the 1950s and 1960s, space applications requiring long-term power sources received intensive research attention. The RCA Company developed a small atomic battery for radio receivers and hearing aids in 1954.

Even though the history of nuclear electric generators dates back to 1913, it wasn’t until the early 1950s that RCAs worked on the initial development of an atomic battery. While the scientific principles are well known, the advent of nanoscale technology, as well as the development of wide-bandgap semiconductors, has led to new devices and material properties not previously possible.

Radioisotopic material, such as a nuclear battery, simply decays that produces energy from its Alpha particles and low energy Beta particles. Beta and alpha particles are key to the battery’s operation.

As a result of these emissions, the potential disparity is created to allow power output and the current to flow throughout the load. It is possible to convert decaying radiation into functional electrical energy by using the following two methods:

Thermal conversion involves the temperature in determining the power output. It can be further divided into the following types.

In a thermionic converter, there are two electrodes, one of which emits electrons thermionically once it reaches a high temperature, while the other receives electrons. To increase the efficiency of the electrodes, they are often combined with cesium vapor.

Thermophotovoltaics (TPV) is a type of power generating device that uses thermal energy to generate electricity. Typically, they consist of a photovoltaic power converter and an emitter.

It is estimated that PV cells are a bit more efficient than thermoelectric couples as they can be overlaid, potentially doubling efficiency. During the production of electricity, Alpha and Beta emissions from the isotope are designed to drop onto a thermal emitter from which IR emissions are given off. These IR emissions are then made to fall on the Thermo PV cell.

The Stirling engine uses the temperature differential generated by a radioisotope to work effectively. In several new experiments, scientists have discovered that a more efficient version of this thermal converter is likely to be present. They have named it the advanced Stirling radioisotope generator.

Non-thermal converters isolate the energy from the high energy penetrating radiation emitted before it is converted into heat. The output of these converters is not dependent on temperature differences, unlike thermoelectric and thermionic converters.

Various types of converters are available, including the following:

Betavoltaic devices (also known as betavoltaic cells or betavoltaic batteries) are nuclear batteries that use beta particles (electrons) emitted from a radioactive source to generate electric current. In most cases, tritium is used as the source.

In a photovoltaic cell, alpha particles impinge on a p-n junction diode (or transducer) to generate electric current. In contrast to Betavoltaics, this system uses a radioisotope to emit Alpha particles.

What is the purpose of an atomic battery?

In a recent report by the MIT Energy Initiative, it was determined that rapid expansion of nuclear energy is essential for tackling climate change and poverty. We need to be able to manufacture these modules quickly to address these issues.

The nuclear power industry could also play a significant role in alleviating the plight of slums and informal settlements. More than one billion people in the world do not have access to modern sanitation, safe drinking water, or adequate shelter. The number will double by 2050 if nothing is done.

Advantages and Disadvantages of Atomic Batteries

Nuclear batteries have the following advantages.

The following are some of the disadvantages of nuclear batteries.

How long does an atomic battery last?

NDB, a startup based in California, has unveiled a battery that lasts 28,000 years and uses nuclear waste. In nuclear reactors, radioactive isotopes are used to power nanodiamond batteries.

The inside of the capsule is hardly radioactive at all, making them completely safe for humans to handle. A nuclear battery will decay to a stable state as soon as it runs out of power, so there will be no waste.

Could a nuclear battery power a car?

An actual small nuclear reactor core (including shielding) could fit inside the engine compartment of a personal vehicle, generating enough energy to power the vehicle.

How big is a nuclear battery?

Nuclear batteries are cylindrical objects, about the size of an automobile, that could fit into a standard ISO shipping container measuring twenty feet (6 meters).

How much power can a nuclear battery produce?

A nuclear battery has the potential to produce up to 50 milliwatts per gram of energy.

How much does an atomic battery cost?

Some medical implants and clock circuits of critical computer systems utilize nuclear batteries in the microwatt range. The price per watt is approximately $2,200, so you can calculate it.

Why was the atomic bomb made?

Now you know who invented the atomic batteries.

We tried to cover all the relevant information to do with atomic batteries, electromechanical atomic batteries and every type of nuclear electric generator in this guide, and hope that it proved to be informative for you. If you have more interesting information that you think might benefit the readers of this article, feel free to let us know or check out our other interesting inventions – Click to see them.

Who Invented The Dab?