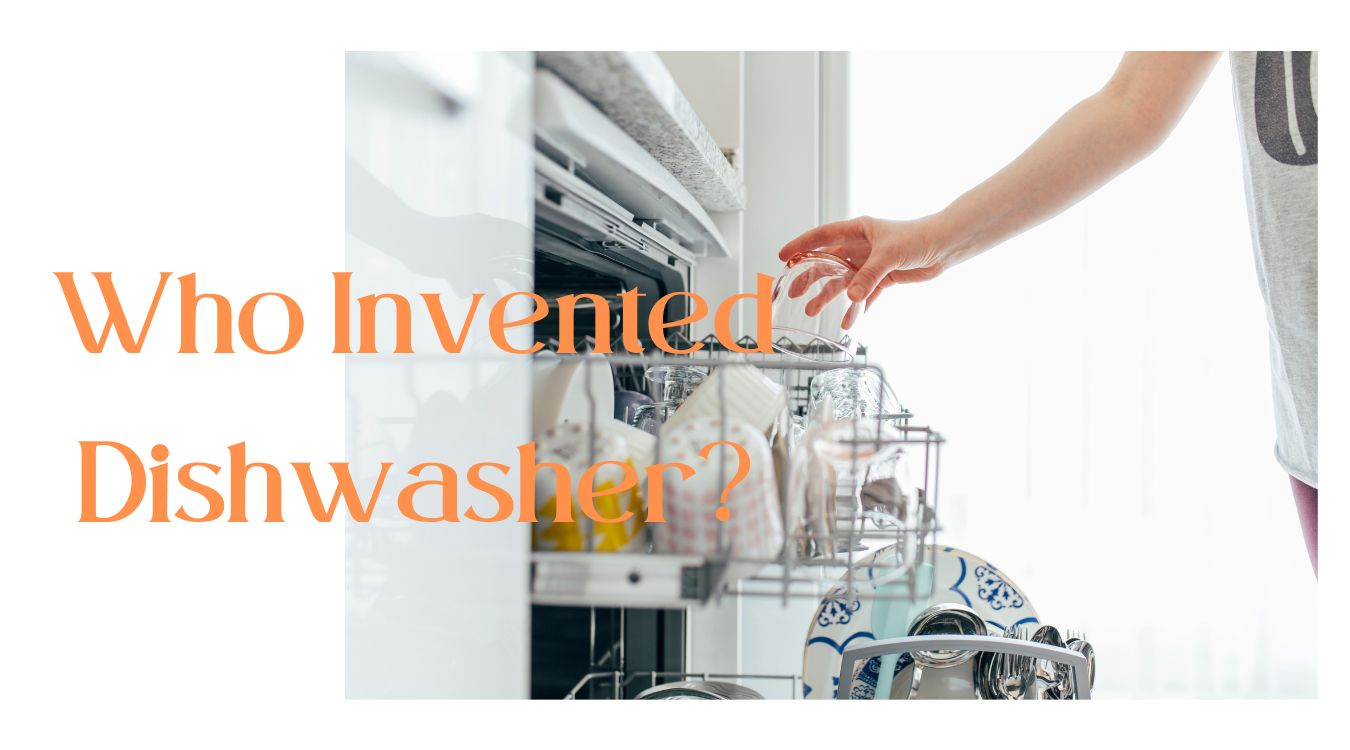 Who Invented The Dishwasher? An automatic dishwasher saves both time and effort; it minimizes breakage because dishes need less handling; it keeps the kitchen neat and clutter-free, and it simplifies clean-up after entertaining.

But who was the genius behind the invention of dishwashers? How did they come up with this life-changing idea? Let’s find out!

In the year 1850, Joel Houghton invented the washing machine made from wood made for washing dishes conveniently. Although this was the first dishwasher ever, even though it was far from perfect, it gave the world a glimpse of what a machine could do.

Using a wheel, the water was sprinkled on dirty dishes by manually turning the wheel. Houghton received a patent for this invention, but the design needed a lot of improvement to actually make a difference.

After getting inspired by Houghton’s model, L.A. Alexander created a dishwashing machine in 1860 that used a geared mechanism to spin a rack of dishes through a vat of water.

While this model was definitely better than Houghton’s model, it too needed a considerable amount of work to get the job done efficiently.

The Invention of a Workable Dishwasher

The story behind the invention of a workable dishwasher is quite interesting and well, relatable too.

When Josephine Cochrane, a wealthy American woman became fed up with her servant’s constant carelessness regarding dishes, she decided to build her own machine to do them.

Her servants lived with her in Illinois and often broke her expensive porcelain dishes while washing them. This used to make Cochrane angry since most of her dishes were imported from foreign countries and she could not afford to lose them like this. Several of the servants who caused the damage attempted to repair the broken dishes, while others fell into a helpless state.

It wasn’t long before the constant breaking of dishes was too much for Cochrane. Then, in 1886, she heard something on the floor shattering. The maid had broken chinaware on the floor.

A broken plate is what prompted Cochrane to devise a new method of cleaning their plates and avoiding further damage. She then took all her dishes to her woodshed along with her mechanic, George Butters.

She pulled up a strong wire inside the woodshed and made compartments for each dish and attached them inside a drum using it. Her next idea was to spray hot and soapy water on the dishes to wash them. Surprisingly, it worked as expected.

Friends were amazed by her invention, and some even wanted one made for themselves. The dishwasher was a hit at the Columbian Exposition in 1893 in Chicago thanks to Cochrane’s unexpected success. This led to widespread news coverage and recognition. Several local hotels and restaurants were attracted to her invention, ordering dishwashers from her.

The invention of dish washing machine by Cochrane was patented in 1897, and she began producing dishwashers on a large scale. Her company, Garis-Cochrane Manufacturing Company, became quite successful. Her mechanic was her first employee!

It was because of the company’s success that smaller and home-use versions of dishwashers were developed. However, the early 20th century did not witness much attention given to the use of dishwashers in homes.

As time went on, other companies marketed various dishwasher models. Around the mid-2000s, dishwasher sales skyrocketed mostly in Europe and America. Today, dishwashers are among the most common appliances around the world!

Josephine Cochran was born on March 8, 1839 to John Garis and Irene Fitch Garis.

John Fitch, Cochran’s grandfather (father of her mother Irene) invented a steamboat. The school she attended in Valparaiso, Indiana, burned down when she was in sixth grade.

On October 13, 1858, residing in Shelbyville, Illinois, she married William Cochran, who had returned the year before from a disappointing experience at the California Gold Rush and subsequently succeeded in business and politics as a Democrat. They had two kids, a boy named Hallie Cochran who died at age 2, and a girl named Katharine Cochran.

During the 1870s, they moved into a mansion and started throwing dinner parties where they used china that supposedly dates back to the 1600s.

In 1883, when she was 45 years old, her alcoholic husband died, leaving her with numerous debts and very little money. This encouraged her to complete the dishwasher’s development. She made dishwashing machines for several of her friends, and they called them Cochrane Dishwashers, hence founding Crescent Washing Machine Company. Later, Hobart Manufacturing Company bought her company and continued with the production of dishwashers.

Her company also became a part of the Whirlpool Corporation.

How did the first Dishwasher Operate?

Josephine Garis Cochran pioneered the invention of the dishwasher by utilizing a mechanical clock outside the machine. She secured the dishes with wire compartments. A common dish in the kitchen was measured to determine the size of the wiring compartment.

In the dishwasher, the hot water spray arm sprayed pressurized hot water onto the dishes before being rinsed. Therefore, no manual washing was necessary. A copper boiler provided the water for the dishwasher.

The dishwasher crank dispersed hot, soapy water all over the dishes while cleaning them. Alternatively, a manual operation was also available. The dishwashers of today only resemble the first dishwasher invented a bit.

The current scenario and the spread of dishwashers

As of today, modern dishwasher machines still have a long way to go before they’re widely accepted. Approximately 72% of glasswashers are used in Germany and Sweden. Spain, Portugal, France, Italy, and Greece all use slightly less than that (55% – 65%). The opposite is true in the UK, where people tend to hand wash dishes more frequently and only 46% of households have a dishwasher. Therefore, the potential market is not yet completely saturated and some untapped potential still exists.

According to a survey conducted in Italy in 2019, the most common type of dishwashing machines in the commercial sector is cup washers/glass washers for bars (about 80% of bars have one model, and 50% of restaurants and hotels have one). The majority of hotels and restaurants from 2008 to 2019 have purchased a front-loading dishwasher, in part due to its small footprint and ability to ensure high productivity: 43% of the commercial activities in the Italian hospitality market own a dishwasher, up from 23% in 2008. In contrast, larger dishwashers, such as hood-types, rack-conveyor dishwashers, and utensil washers, have lower market penetration, with market shares of 27.0%, 13.3%, and 12.0%, respectively.

Now you know who invented the dishwasher!

Who Invented The Telescope?