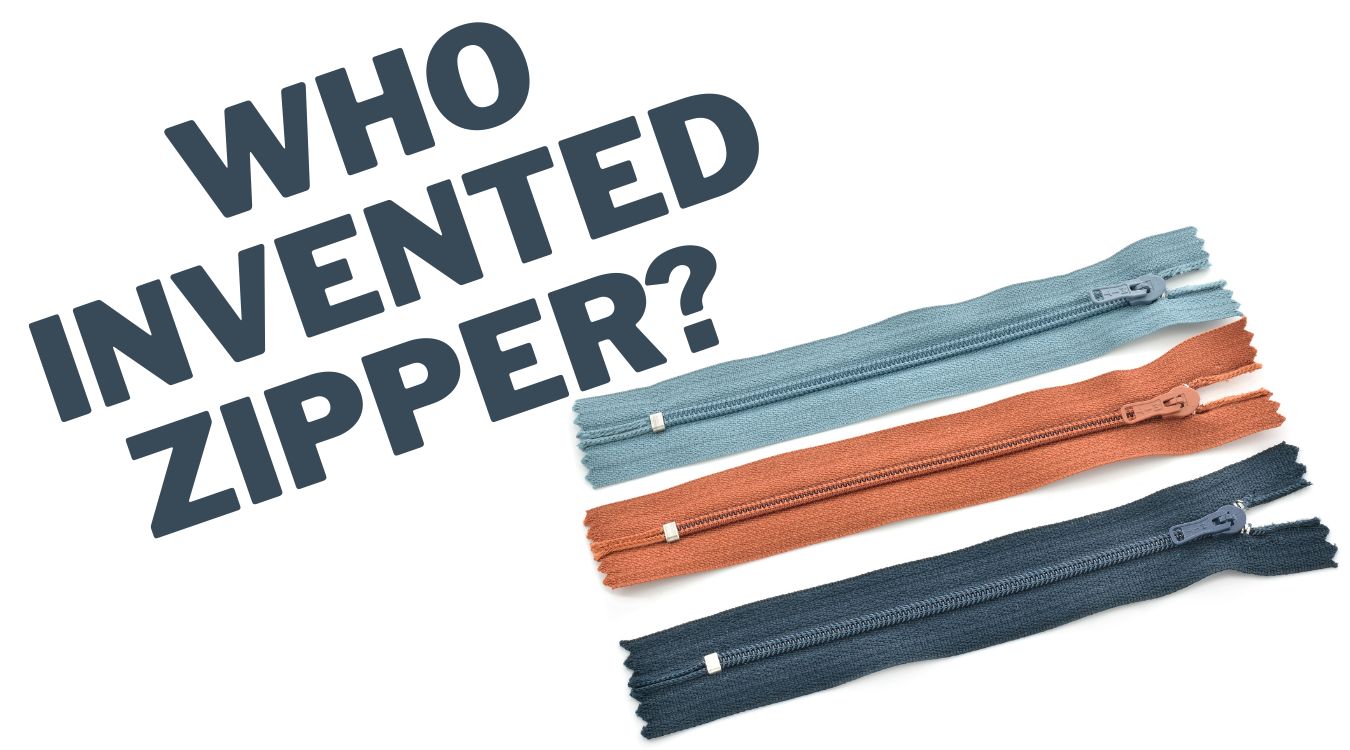 Who invented the zipper? Zippers have kept our lives together – quite literally. A zip (also known as a zip fastener) connects two pieces of fabric together and thus is widely used in clothes, shoes, and even bags. However, zippers were not always like the ones you see on your jackets and hoodies these days.

They too have quite extensive history. Let’s have a look at the history of the zipper and how long have they been around.

The first zipper was patented in 1851 by Elias Howe, who invented modern lockstitch loop sewing machines. His original patent for ‘Automatic, Continuous Clothing Closure’ involved distributing closure clips evenly along the area that needed to be zipped rather than joining two rows of teeth as modern zippers do. Around this time, Howe was also working on introducing the working of a sewing machine to the public. Since this marketing process took a lot of his time and effort, he did not move forward with the invention of his fastening elements for automatic continuous clothing closure.

Quite a few years after that, Whitcomb L. Judson, a Chicago-based inventor, began the Universal Fastener Company (later Talon) in 1893. He began manufacturing hook-and-eye shoe/boot fasteners, which he introduced at the World’s Columbian Exposition in 1893. A row of hook-like elements appeared on one side of the closure, while eye-shaped elements appeared on the other. A slider was used to close and open the fastener in this device, which eliminated the need to tie each hook separately. The slider could be repositioned in either direction to extend or retract the fastener. Even though it was quite better than the first zipper ever, it still was difficult to use. Moreover, it tore fabric in a lot of instances.

He did receive a patent for this invention but the patent did not include the word zipper.

The hooks and eyes were first clamped on fabric tape around 1905, so they could be sewn into a garment or shoe. Although it looked cool, it was bulky, costly, and not suitable for clothing.

Eventually, it was Gideon Sundback who invented the modern zipper in 1913. He used to work in New Jersey for Universal Fastener Company. His original design of a continuous zipper chain had two rows of teeth that were interlocked, connected by a slider on a cloth tape. He called it Hookless No. 1. The model had some drawbacks, however, such as causing excessive wear and tear on the fabric and being highly expensive to produce.

Throughout his efforts, Sundback lowered the cost of production and sought to retain the integrity of the fabric. His ‘Separable Fastener’ was patented in 1917.

The upgrade to Sunback’s design made it more durable, faster, and more reliable, and this attracted the US Army’s attention. During World War I, the army began using zippers on clothing and equipment for the troops, despite the fact that the invention was still relatively unknown. Some people also used them for their tobacco pouches.

Sundback’s invention was used to manufacture the BF Goodrich Company’s new rubber boots in 1923, then all of that changed. Zippers were named after the noise they made by an executive at the company.

By the time BF Goodrich tried to patent the zipper name, it had already become a common noun due to its increased use in clothing and other items.

The zipper didn’t appear until the 1930’s when a sales campaign for children’s clothing featuring zippers tried to sell it as a solution to teach children self-reliance.

Upon its popularity, zippers were hailed as a way to prevent “embarrassing disarray” in men’s trousers by designers by the French fashion designers.

Since the zipper was invented, it has been used for many different purposes and appears in a wide range of styles in the fashion industry. Over time, the zipper has improved in many ways. Here are some facts about the types of zippers available today.

One type of zipper has a coil on either side of the slider known as a coil zipper. The coil teeth are formed by winding the coils. In the past, nylon was used for coil zippers. Polyester was however introduced to make zipper teeth later.

There are two types of classic zippers: metallic zippers and plastic zippers. Metal zippers are so-called because of the metal teeth used in fastening them.

A plastic zipper has two rows of plastic teeth and a plastic pull that zips up.

An open-ended zipper closes the facing rows of teeth using a box-and-pin mechanism.

The zipper is known as a two-way open-ended zipper because it can be closed and opened using two pulls.

Zipper manufacturers create different kinds of zippers based on the products they will be used in. Here are some more fun zipper facts.

Now you know about the history of the zipper!

We hope that the guide proved to be informative for you. If you have more relevant information that you think can benefit our readers, feel free to share in the comment section below!

Who Invented The Hoodie?