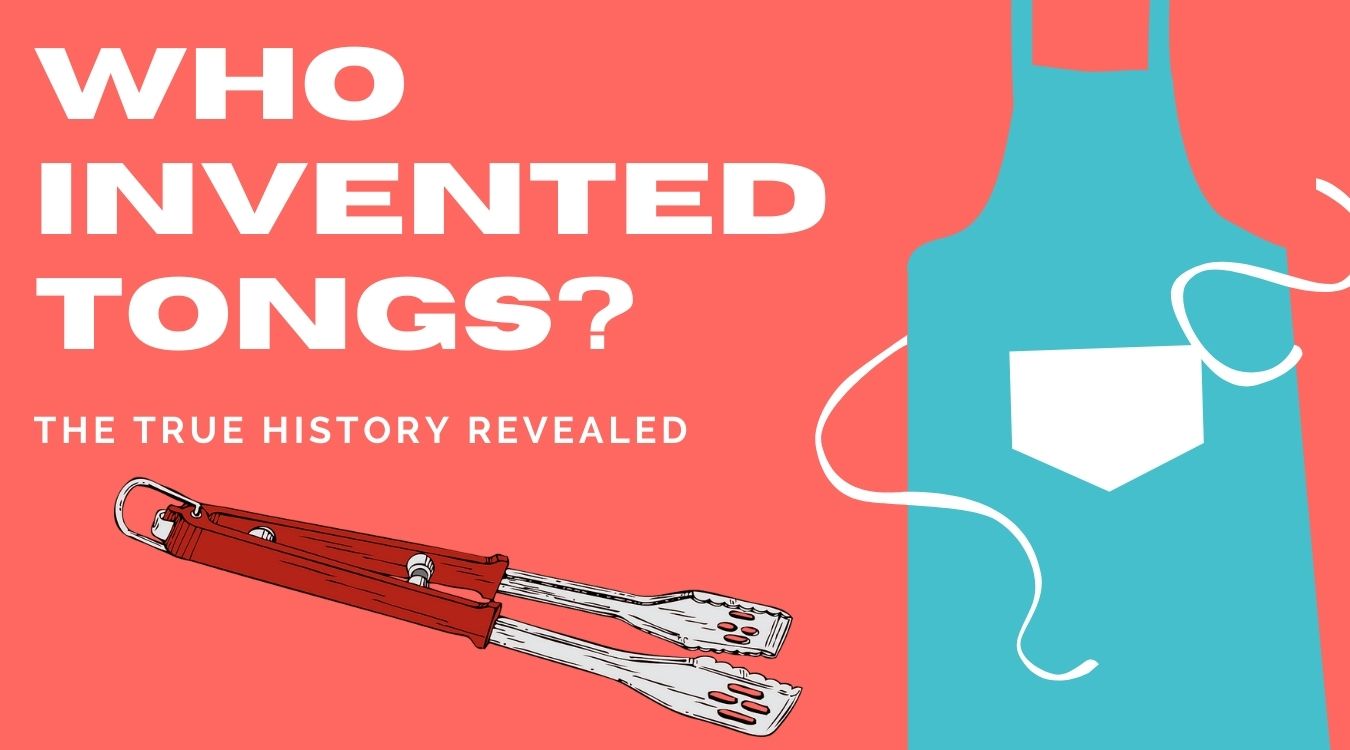 Tongs were thought to be invented by Egyptians around 1450BC. They were well known for using long metal rods and tools that appeared like tongs to hold objects over a burning fire and to rotate cooking food.

Although this is the first known mention of tongs in history, there are a few other people who dispute this claim so let’s get into some of the weird and wacky histories of who invented tongs.

Explainer: Tongs/tweezers have the task of holding or gripping objects or food so that they can be handled more easily. This is often needed when food is slippery or too hot to handle.

The first pair of tongs belongs to the Egyptians. Tongs likely started off as basic wooden tongs and then over time progressed to bronze bars as early as 3000BC. Over time they progressed to what we now know as modern-day tongs.

An Egyptian wall painting from 1450 BCE shows a crucible supported between two metal bars. The same painting shows someone holding a small object over a fire with a tong-like instrument. Bronze loops capable of handling heavy crucibles also happened to appear at this time.

When considering all the facts in regards to who first invented tongs then the Egyptians come out on top.

Sources on the internet as well as the ancient Jewish text Pirkei Avot claim that tongs were invented by God on the twilight of the first Shabbot. The reason for this claim is because of the famous saying “you can’t make tongs without tongs”.

This is referencing the fact that a blacksmith would surely need a pair of tongs to be able to hold the tongs he is making – You be the judge!

If you’re more a modern-day invention fan then the official patent owner for tongs goes to Murry H Franklin. His patent was filed in 1952 and granted in 1956. On paper, he is the official owner/creator of tongs (at least in the USA). That being said, 1952 is quite a long time after 1450BC so we have a hard time granting him the official inventor.

Cooking tongs are the basic term given to all types of tongs that can be used in the kitchen. For most people that is the general definition of tongs but there are many other types in the market today. When people ask who invented tongs they general mean who invented food tongs.

The main purpose of salad tongs is to ‘toss salads’ which is the basic art of mixing salad dressing into the salad.

It involves using the tongs to grab the leaves within the salad and constantly flip them ensuring you efficiently mix the salad and the dressing together. This can take up to a few minutes depending on the size of the salad.

They are usually made of plastic, metal, or wood.

Serving tongs may be the first pair of tongs you’re exposed to. These often mini tongs are used with serving plates and things such as finger food. They allow you to serve yourself various finger foods or salads directly from a serving plate to your individual dish.

Stainless steel tongs are the most common type of tongs in the modern-day market. They can be used for both serving and various other uses.

BBQ tongs are made specifically for use on a barbeque. They come in a number of sizes from small to large and are shaped perfectly to allow you to flip steaks or other meats on the barbeque.

Scissor tongs have paddle-shaped tips that better grip bulky items such as slippy potatoes. One of the biggest complaints with basic utility tongs is the lack of grip. Using scissor tongs can solve this issue.

Silicone tongs are a new item that is quickly becoming the most popular throughout the world. It is claimed that they are safer and more hygienic than your typical pair of tongs. So if flipping food is your thing and you don’t want to get burnt by metal then perhaps silicone is the right option for you.

In some situations, you may need something that can handle a higher temperature. This is often the case for a blacksmith and people in the art industry that use specialised high heat tongs to handle the objects they are working with over a fire.

Crucible tongs are scissor-like tools that concave together, which allows you to grab hot crucibles, flasks, evaporating dishes, or even small beakers. They are usually made of durable metals, allowing them to endure a very hot temperature. Their main use case is in a laboratory or art studio where the user will be working with extreme heat and a possibly dangerous situation.

Are there a better alternative to kitchen tongs?
Kitchen tongs already come in various shapes, styles and sizes and with multiple grips and materials.

The progression of kitchen tongs does improve every few years but is there something we can create that is even better? What is your biggest pain point with kitchen tongs? Is it how wide they open? Is it the lack of grip? If you’re finding yourself having these issues then we can definitely solve these problems with a new design. Alternatively, you could solve some of your issues with silicone rather than use metal tongs.

Are modern tongs still the best for handling food?
We do think that the modern-day version of tongs is the best out of all the different types. If you love cooking and handling hot food is a priority then you can’t go wrong with the newest products on the market.

What country invented tongs?
If you’re looking for a specific country then the answer would have to be Egypt. We haven’t found any sources that pre-date the information we have gathered on this invention.

Final notes on who invented tongs

Imagine yourself in the kitchen today and needing to use a fork or other inefficient utensil to flip and cook your food. That sounds like an absolute nightmare to us.

Let’s not forget the use of tongs outside the kitchen!

A blacksmith without a good pair of high heat tongs is going to have a hard time completing his job. Sure, he could use another tool or a mock-up of his own amazing tong-like tool but it likely wouldn’t be crafted as well as what we have available today.

So we thank the Egyptians and we thank god and we thank Murry for their invention that has changed the way we cook forever. By allowing us to grab our objects with ease we can now breathe a sigh of relief.

Who Invented The Fly Swatter?