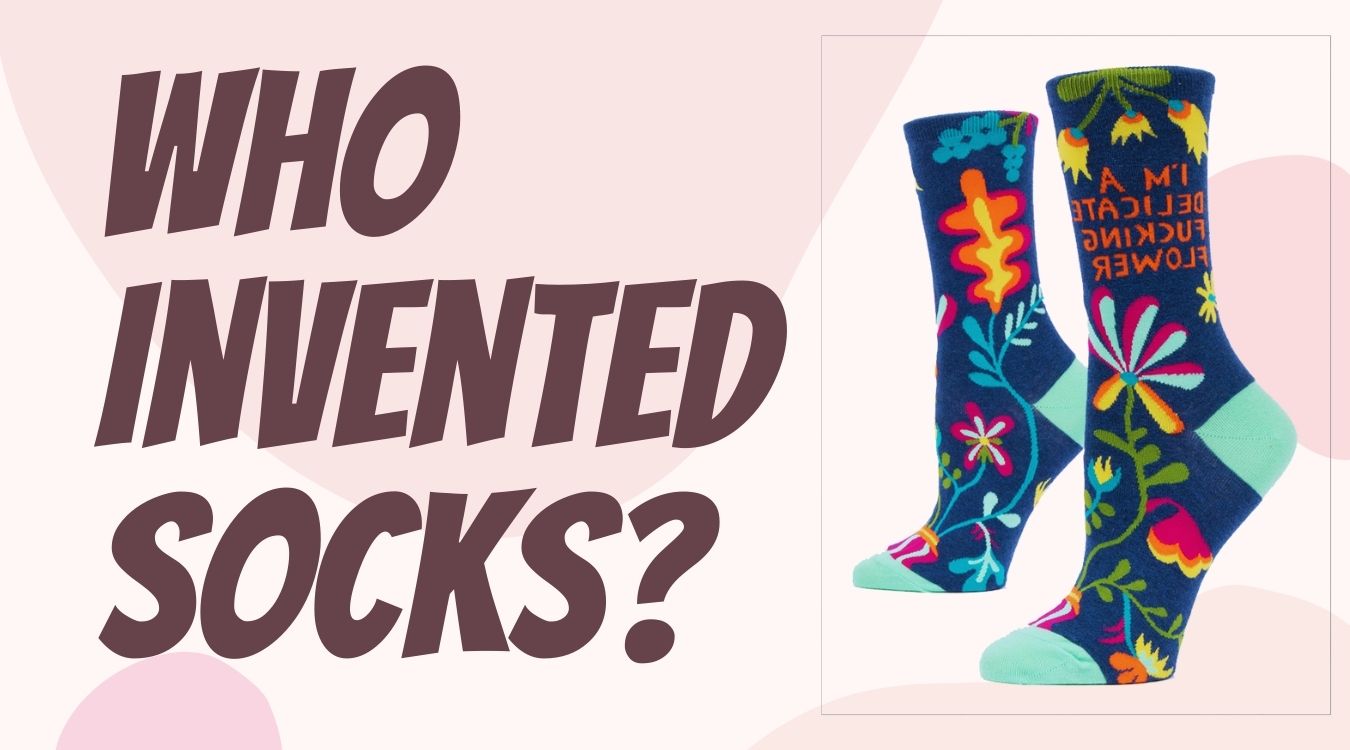 Socks seem like a small part of our overall wardrobe, but did you know that the history of socks is a long and fascinating one? Who invented socks and why? When were socks invented, and did they come before or after shoes were made?

These are just some of the questions this post attempts to answer, so let’s explore who invented them and how socks evolved from what they were to what they are today.

When Were Socks Invented?

As we mentioned, the history of socks has a pretty fascinating history. In fact, they’re believed to have been around as early as the Stone Age or around 5,000 BC. Of course, our primitive ancestors didn’t exactly wear socks that looked like ours today. During their time, what they knew as socks were simply foot-like coverings made of plants, animal skins, or pelts tied around their ankles. If not for cave paintings to support this theory, we probably wouldn’t even know that primitive humans wore sock-like clothing. Since ancient socks were made from organic materials, no evidence has survived as they’ve all decayed.

Several thousand years later, specifically around the 8th century BC, the first recorded evidence for socks appears in the ancient Greek poem “Works and Days” by the poet Hesiod. In his poem, Hesiod mentions “piloi,” which is a type of sock worn under sandals. Unlike the socks that we’re accustomed to, however, the piloi in ancient Greece was made from matted animal hair.

So did the Greeks make the first socks known to man? Not exactly.

Sometime around the 2nd century AD, the Romans also started sewing their own version of socks, which looked more like the ones we wear today. Before that time, ancient Romans settled for strips of leather or woven fabric wrapped around their feet. But in the 2nd century AD, they started sewing pieces of fabric together to make fitted socks, which they called “udones.”

Around the same time, though, people in ancient Egypt were also making their very first knitted socks. They used a technique called “naalbinding,” wherein the woven socks even had a split-toe design so they could be easily worn with sandals. Depending on the source, the earliest known surviving pair of these Egyptian knitted socks were either found in the graves in Antinoe or Oxyrhynchus on the Nile. Either way, it is believed that these socks date back to around 240 to 500 AD.

By the 5th century AD, socks were called “puttees” by the religions of Europe. These socks, back then, represented purity.

As you can see, it’s a little difficult to pinpoint who made socks and exactly when socks were invented. It seemed that the ancient civilizations all had more or less the same idea when it came to foot protection. Their materials may vary but they all had one thing in mind: they needed to wear socks to keep their feet warm and protected.

But while we can’t conclusively specify who invented socks, what we do know is that by the Middle Ages, woven socks and knit socks had become a status symbol. This was around the year 1000, and the socks the nobility sported looked more like leggings. Since they didn’t have an elastic band, garters were used to hold them up. When breeches became shorter, socks became more expensive as people had to use more materials to make them longer.

By the 12th century, socks began to be widely associated with status, though the working class did produce their own homespun woollen socks and stockings. Quality was the defining attribute that separated socks worn by nobles and those worn by the working class. Those worn by nobles were, of course, woven from higher quality cloth and featured a bias cut and a back seam.

Three centuries later, French and Italian aristocrats sported the first hand-knitted silk stockings. They used this material specifically to promote easier movement, as well as to show off shapely legs. British nobles soon followed this trend for sock fashion. Around 1490, the British came up with what we know today as tights, which was a combination of breeches and hand-knitted hosiery.

Believe it or not, by 1566, laws were enforced to strictly regulate socks and other hosiery. This basically meant that “sock police,” composed of four people, were positioned twice a day at the gates of London to check the legs of those leaving or entering the capital. Their job was to make sure no one was wearing the wrong kind of socks. If they were, they could get locked up!

Two decades later, in 1589, English clergyman William Lee invented the first knitting machine. It’s with this knowledge that we can perhaps come closest to answering the question of who made socks — or at least pinpoint who helped propagate modern socks.

Wanting to get a patent for his invention, Lee made a pair of black stockings and gave it to Queen Elizabeth I. The queen, however, ultimately refused to grant Lee’s request, complaining that the wool stockings Lee’s machine-made were too uncomfortable. She wasn’t also fond of the idea that the machine could potentially eliminate the job of the people who had been hand knitting stockings.

Similar to Ferdinand Magellan — the Portuguese explorer who found financial support through Spain’s King Charles I — William Lee found the financial backing he needed not from the royalty of his homeland, but from King Henry IV of France. The French king saw the potential in Lee’s machine, which led Lee to move to France to open a stocking factory. With his knitting loom, more socks were made as factories sprang all over Europe. Wool socks were still made for the working class and colored silk socks were made for the nobility.

It was in the 17th century that cotton was the material used for socks, due in large part to the fact that there was an extreme abundance of this material. Thanks to cotton, the sock evolved to accommodate various styles and shades, and sock fashion continued to flourish. Colors ranged from the usual natural ones to deeper, brighter hues. By 1938, nylon was introduced, which allowed socks to be made from blended woven fabrics. The most common blends include cotton, wool, polyester, and nylon. Over time, other fabrics are also used for socks, such as spandex and bamboo.

Why Did They Invent Socks?

Though the modern sock is but a humble part of our overall clothing, the concept arose from very simple but practical needs: to keep our feet warm and protected. This is especially true for the working class, who spend most of their day outdoors. Nobles and royalty used socks more as a matter of comfort, though they also viewed socks as a fashion statement and a status symbol back in the day.

In the modern age, there are different types of socks that serve various functions. For instance, compression socks are a specialized pair used to regulate blood flow and improve circulation. With compression therapy, gentle pressure is applied on the ankles and legs. In using compression socks, the advice of a medical professional is needed since they’re not exactly for regular use, unlike casual socks.

On the other hand, crew socks or mid-calf socks are made mostly for those who spend a lot of time doing outdoor activities or sports. They give support, protection, and coverage, as well as keep our feet hygienic thanks to their moisture-wicking properties. No-show socks keep our feet from getting blisters when wearing loafers and bellies.

Other types of socks are made to complement different outfits. An example is trouser socks for women, which are made of thin, light, breathable material that can keep feet cool for hours during formal events. Similarly, dress socks are made from a breezy fabric that let the feet stay cool while men don their suits or tuxedos.

Winter socks and thigh high socks, of course, keep cold feet at bay during the chill weather. These are usually thicker than most casual socks and provide thermal insulation.

Why Are Socks Called Socks?

The modern English word sock is actually derived from its older English counterpart “socc,” which meant light slipper. Until the 17th century, socks were actually called stockings. The root word for these terms is the Latin term “soccus,” which pertained to low-heeled shoes used by Roman comic actors.

What Came First: Shoes or Socks?

With the history of socks spanning the ages, you might be wondering: which came first? Shoes or socks?

The short answer: shoes came first. The first shoes were, in fact, sandals, which is probably why the ancient Egyptian socks we mentioned previously came with split toes so they could be worn comfortably.

The earliest evidence of shoes is dated around 10,000 years ago, sometime around the Neolithic Revolution. This is when people began to farm. Leather shoes were typically worn by farmers so they could keep their feet safe and dry while they walked on soil and gravel. Socks came much later to provide added warmth and comfort.

Why Do Socks Exist?

As mentioned, socks exist mostly to keep your feet warm, especially if indoor heating is low during the cold weather. Socks also protect the feet and keep them comfortable while wearing shoes. Over time, socks have taken on a more health-related role as opposed to a fashionable one since they can help reduce instances of athlete’s foot, ringworms, or smelly feet. Compression socks specifically help with blood circulation while sports-oriented socks help athletes improve their performance while keeping them from getting injured.

Knock Your Socks Off

Socks have a long history that will, well, knock your socks off (if you’re wearing socks). While we can’t exactly pinpoint who invented socks, suffice it to say that William Lee’s invention of the knitting loom helped mass-produce these garments, making socks more accessible to everyone. Though socks are just part and parcel of our everyday wardrobe, they serve a very functional role that adds comfort, warmth, and protection. So whether you like animal skins, ankle socks, knee socks or something in between, we can all agree that we’re grateful for the inventor their existence.